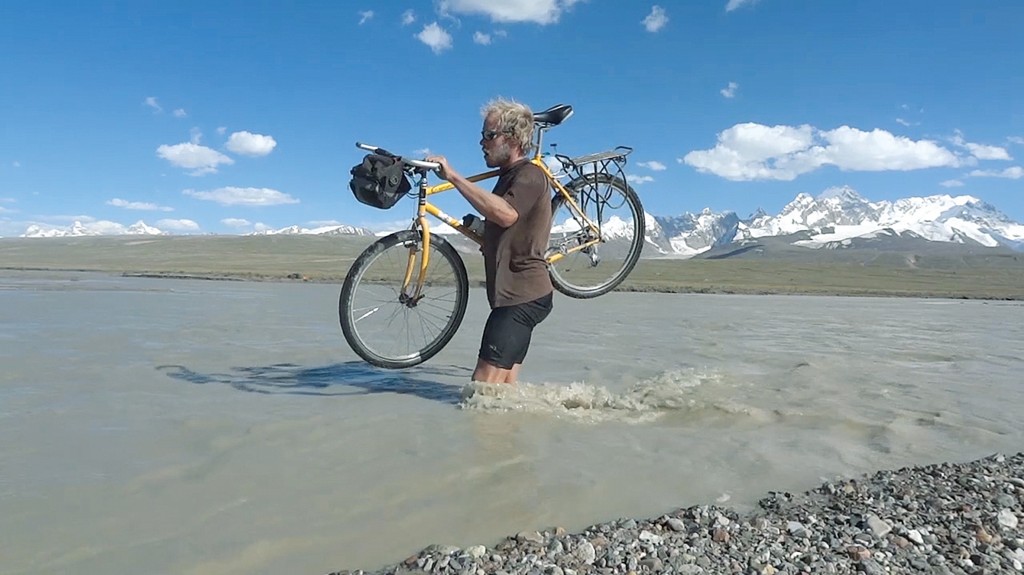 “River crossings are a nightmare”

Usually, Kyle Dempster is an alpinist, but then he decided to ride his bike through Kyrgyzstan for seven weeks. Since then, borders have shifted for him – geographically, politically, and personally. In our interview, Kyle tells us about his fear of rivers, the culture shock, and the importance of olive oil on such a trip.

E.O.F.T.: Kyle, tell us the truth: how much vodka did you have during your trip?

Kyle Dempster (laughs): That was just once at a military checkpoint. It was a bit strange to be handed a big glass of vodka instead of a glass of water after riding 60 kilometers. Naturally, I was instantly drunk after such a long day.

Kyle: No, I could choose between vodka, beer and fermented horse milk – very fermented! I tried all three, and I have to say that I needed a sip of water even more afterward. But it was also fun. You know, the soldiers are sitting somewhere on the border with China, there’s nothing going on, of course they drink vodka. When they see a white guy coming along on his bike, they think, surely he would like a drink as well.

E.O.F.T.: So people in Kyrgyzstan are friendly?

Kyle: They were fantastic. I often met nomads, who were driving their sheep through the mountains in summer. I always had to make sure I had enough to eat. What people gave me made for a nice addition. They often gave me tea or nan bread, sometimes also fresh meat. Their generosity was amazing.

E.O.F.T.: Although they often didn’t know what you were doing there.

Kyle: Right. But I had a small English-Kyrgyz dictionary with me and had learned around 20 words before setting out. In total, I stopped three times to go climbing, once for four days. I usually did the following with the nomads: I pointed to the mountain, then to the bike, and then to them. Afterward, I picked up the bike again.

E.O.F.T.: In the critical scene of the film you’re alone: during the river crossing. How did you feel?

Kyle: I was swept away during an earlier crossing and had to swim with the strong current of the Üch-Köl river, which was really scary. At that point I was running on empty, I had had enough, I was afraid, and I just didn’t want to tempt fate any longer.

E.O.F.T.: You also left a very personal note before crossing the river.

Kyle: When I see that scene, I remember how scared I was by the river. It was a message to my friends and family, along the lines of: if this doesn’t work out, know that I love you! I thought if I was washed away, someone would at least find my camera.

E.O.F.T.: In one scene you talk about the “unknown path”, which you chose instead of the other one.

Kyle: What I meant is the power of aspiration. Or the spirit of discovery, also discovering yourself. Today there are so many things that are basically “ready-made”, so we can live in a sterile world. But we can always break out of this to find out what we can discover. Both in the world outside an inside ourselves.

E.O.F.T.: What did you discover for yourself during this trip?

Kyle: I learned that river crossings are a nightmare. And that climbing trips with a bike make sense. I also saw the social decline of a post-Soviet country – the abandoned cities, mines, and military bases were physical proof.

E.O.F.T.: What was your routine during this trip?

Kyle: I had a light tent to sleep in. I often got up very early, had a quick breakfast, made coffee, packed up, and then rode as far as possible. I always tried to reach a river at the end of the day to get fresh water. I also fished there. It was just a day-to-day existence. To be honest, apart from the river crossings it was quite stress-free. I only had to patch a tire once. And I ran out of chain grease. I just used olive oil instead.