Mammut presents six ‘rock classics’ — milestones in the history of sports climbing. And the people who climbed them for the first time, revisiting their own routes accompanied by top climbers from the Mammut Pro Team. This Episode: Anna Stöhr

The end of the world is not behind the seven mountains and not at the poles of this earth. It is in Southern France, in the mountains of Luberon, and was a site of pilgrimage for te best climbers in the world in the 1980s the heard of Buouxis is beating in “Le Bout du Monde”, and the idea of vertical dancing condenses in “La Rose et le Vampire”.

“Le Bout du Monde” – the end of the world – is located at the very right edge of the rock world of Buoux, one of the most famous climbing areas of the world. In the 1980s, climbing history was written here, and sports climbing was characterised essentially. Patrick Edlinger, called “Le Blond”, made the news with his spectacular solo tours and difficult first ascents. The limestone rock in the Massif du Luberon near the town of Buoux is up to 200 metres high and had everything that climbers might wish for: delicately chiselled limestone plates, powerful overhangs, holes and strips – as well as a collection of the most difficult routes as they were quite unique in Europe at the time. 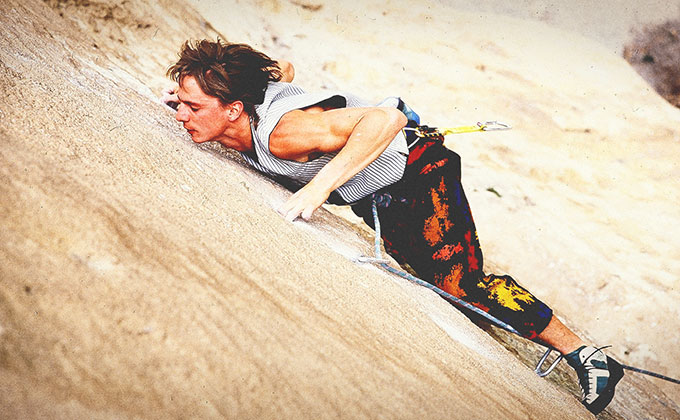 Back in 1985: Antoine Le Menestrel, the ‘danseur de façade’ who developed the esthetics of climbing into abstract perfection.

When Antoine le Menestrel had opened the route “Chouca” (8a+), named after his dog, which had died just previously, in 1984, this was the starting signal for the development of the most impressive wall section. «Antoine spent many weeks optimising his new route» The next year, Antoine tried to climb a line through the most forbidding part of the wall – and since there were no holds along some metres in the lower part, he modelled one of the most famous climbing points in the world: the “cross-pull”. It became the epitome of sports climbing in the late 1980s; at the time, it was common to change too-small or even missing holds artificially. Antoine spent many weeks optimising his new route – extremely wide pulls at finger holes, dynamic movements at very small shelves –, until he got through in September 1985. “La Rose et le Vampire” still is one of the most famous climbing routes in the world, not least due to the unique cross-pull. It was the first 8b in Southern France, and climbers from around the world came to try it out. Many were sucked dry by the vampire and only few found the rose– as Antoine said: “The route is the vampire, and the rose is for the winner.”