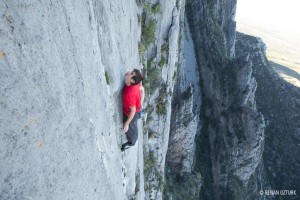 For some, this might have come as a big surprise; but for others they may have sensed it would happen, sooner or later.

Last week nutrition company Clif Bar dropped five of its sponsored athletes, terminating their contracts immediately.
A statement on the company’s website reads: “We concluded that these forms of the sport are pushing boundaries and taking the element of risk to a place where we as a company are no longer willing to go.”

What they say is, that risk is, and will always be, a personal choice. An issue, Alex Honnold (El Sendero Luminoso, E.O.F.T. 14/15) is confronted with most of his daily life. He is one of the five climbers, base jumpers and high liners (also including his fellow sufferer Cedar Wright (SUFFERFEST), Dean Potter, Timmy O’Neill and Steph Davis), who have been left high and dry. Reactions are different. Whilst climbers from all over the world leave sarcastic remarks all over the Clif Bar social media channels, those affected feel betrayed. On the one hand – Clif Bar is still a major sponsor of Banff Grand Prize winner Valley Uprising, which stars Honnold, Wright and Potter with some of their best climbs – but understanding is on the other. Reasons for why might be the fact that Climbing at the Edge will always be a scene without certainty. There’s no safety in the first place, but most notably no room for accurate generalizations, true for both: climbers and sponsors.

Alex Honnold is equal to the situation, and most publicly and very carefully considered, he shares his thoughts in the New York Times.

YOSEMITE NATIONAL PARK, Calif. — SEVEN years ago, when I started free soloing long, hard routes in Yosemite — climbing without a rope, gear or a partner — I did it because it seemed like the purest, most elegant way to scale big walls. Climbing, especially soloing, felt like a grand adventure, but I never dreamed it could be a profession. However, over the years sponsors came to me one by one. I assumed that they wanted me to represent their companies because they supported what I was doing.

So it came as a shock last week when I came off a four-day climb of El Capitan in Yosemite to learn that Clif Bar, which had sponsored me for four years, had fired me along with four other well-known climbers: Dean Potter, Steph Davis, Cedar Wright and Timmy O’Neill. What was going on? Was Clif Bar terminating its sponsorship because I was doing exactly what I thought it had signed me up for in the first place?

Within the climbing world, we are all known for taking risks in one form or another. Our careers as climbers have been shaped by free soloing. Dean Potter and Steph Davis have taken the game much further with BASE jumping and wingsuit flying — parachuting off cliffs — but at heart they are still rock climbers who are inspired by the mountains. The fact that the adventures that we seek out are dangerous is part of what makes them interesting to the public and to sponsors.

Outrage swept through the climbing community at the news of our firing, which followed the release of the film “Valley Uprising,” a history of Yosemite climbing that shows some of our exploits. I came down from El Capitan to dozens of texts and emails asking for details or commiserating. On the web, hundreds of comments lit up climbing sites, mostly along the lines of “I’m firing Clif for stupidity” or “Lame move Clif Bar.”

Of course, I was disappointed to be dropped by a sponsor, especially since I’ve always liked Clif Bar’s product and really respect the company’s environmental activism. And it did seem odd that after years of support, someone at Clif Bar seemed to have awakened suddenly and realized that climbing without a rope on vertical walls as high as 2,000 feet is dangerous.

Still, I couldn’t help but understand their point of view.

“We have and always will support athletes in many adventure-based sports, including climbing,” Clif Bar said in a statement after the furor erupted. “And inherent in the idea of adventure is risk. We appreciate that assessing risk is a very personal decision. This isn’t about drawing a line for the sport or limiting athletes from pursuing their passions. We’re drawing the line for ourselves.”