Mammut presents six ‘rock classics’ — milestones in the history of sports climbing. And the people who climbed them for the first time, revisiting their own routes accompanied by top climbers from the Mammut Pro Team. This Episode: Jakob Schubert

The sunny south, sea and warm rocks – all the ingredients for a rock climbing feast. The Italian climbing area Finale Ligure near Genoa has all this – and much more! Italian climbing history has been written here for more than 30 years.

The rocks of Finale Ligure are one of the biggest climbing areas in the whole of Italy. Today, there are close to 3,000 routes distributed over some 160 rock faces, most of which are excellently secured with bolts and guarantee maximum climbing pleasure at all levels of difficulty. However, the nature of the climbing is pretty “particular”: generally crimpy and technically demanding face climbs on small grips and water holes, with some pretty tough difficulty gradings. When we went back, for the first time in more than a decade, to do some climbing in Finale last year, we realized that the gradings for all the routes were half a grade lower in comparison with the other regions we had been climbing in – so be prepared, in Finale no routes are «given away»… 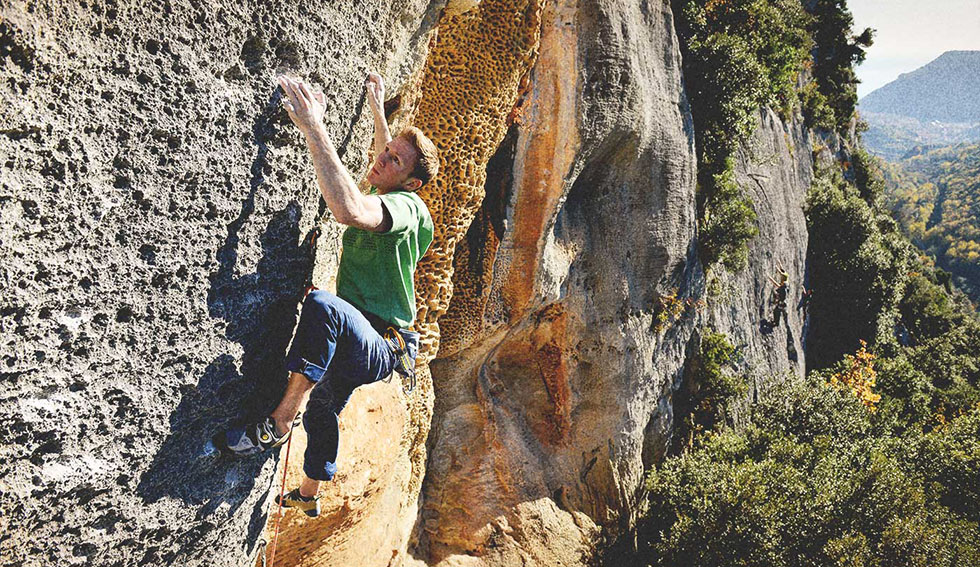 One of the «resident caretakers» of the rocks of Finale was Andrea Gallo. In 1986, he was just 22 years old – a «young hot shot» in the best sense of the word! A passion for climbing had brought this young man from Turin to Finale Ligure, where he quickly earned a reputation as the best climber in the region. No wonder, as he climbed every day, tirelessly opening up route after route. When he spotted the line across a gray and seemingly impossible rocky pinnacle on «Alveare», he had no doubt: he just had to climb it! To start with, he didn’t manage to climb a lot of the individual moves. However, he worked determinedly on his problem throughout the spring and, over Easter, managed to climb all the way to the last crux section. But the temperatures were already too high – he couldn’t hold onto the grips! It was not until late fall, on December 2, that he finally made it all the way to the top – giving Finale a new «test piece» and, for a few years, the most difficult route.