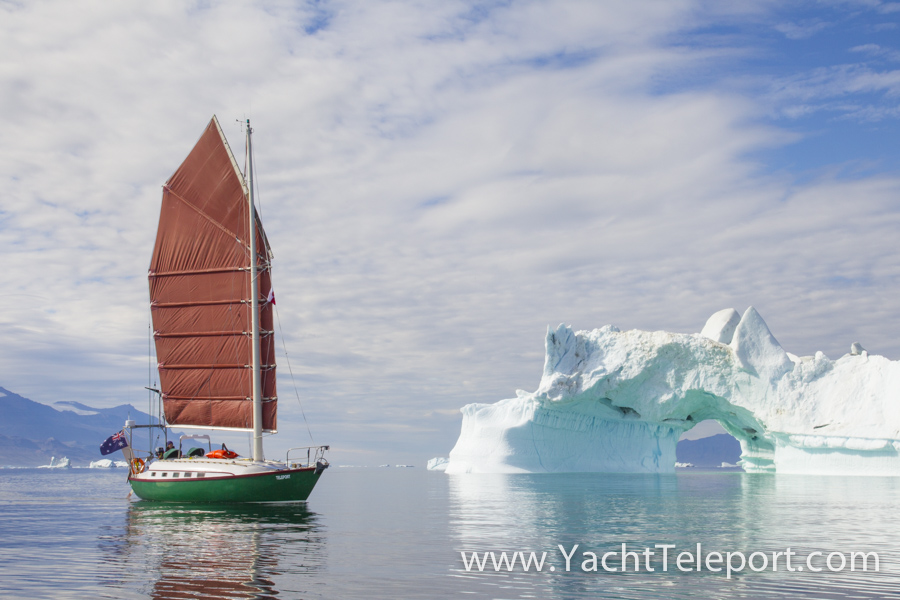 When Clark and I returned home from our ‘1000 Hour Day’ expedition hauling those ridiculous carts across ‘Victoria Island’ in the Canadian Arctic in 2009 which featured in E.O.F.T (‘The Crossing’), I wasn’t quite sure what I wanted to do next. I was keen to become a photographer, and was lucky enough to become an assignment photographer for Australian Geographic magazine, and Canon’s Australian Ambassador for 5 years.
A few short weeks after coming back from Victoria Island and finishing writing my book about it , I was cycling around Tasmania for 3 weeks with my new girlfriend Jess, when we stopped in at a friend’s place who mentioned that he had just bought this cute little green sailboat over in Canada with the plan to enter into a solo race across the Atlantic, but something else came up and he couldn’t do it, and so he was about to put this little sailboat back up for sale.

“What we arrived to was nothing short of a disaster …”

So within a few months of coming back from Victoria Island, Jess and I owned an old wooden junk-rigged sailboat, which we renamed ‘teleport’ (the idea being like in teleportation, we’d hide inside this boat while it magically transported us to amazing new places). It took us a few years to even save up the money to fly over to Halifax (east coast Canada) to see our boat for the first time – which had been sitting in a car park freezing and thawing every season – and by that time much of it’s wood had started to rot. What we arrived to was nothing short of a disaster, and if we’d realised the enormity of the disaster when we first turned up, we’d have walked away from it. The engine didn’t work, the keel was delaminating and filled with water and rotten wood, the deck and cockpit was rotten, the whole deck needed to be re-fibreglassed, it needed new rigging, the whole inside had to be gutted, re-built, sealed, insulated re-wired, the lot. 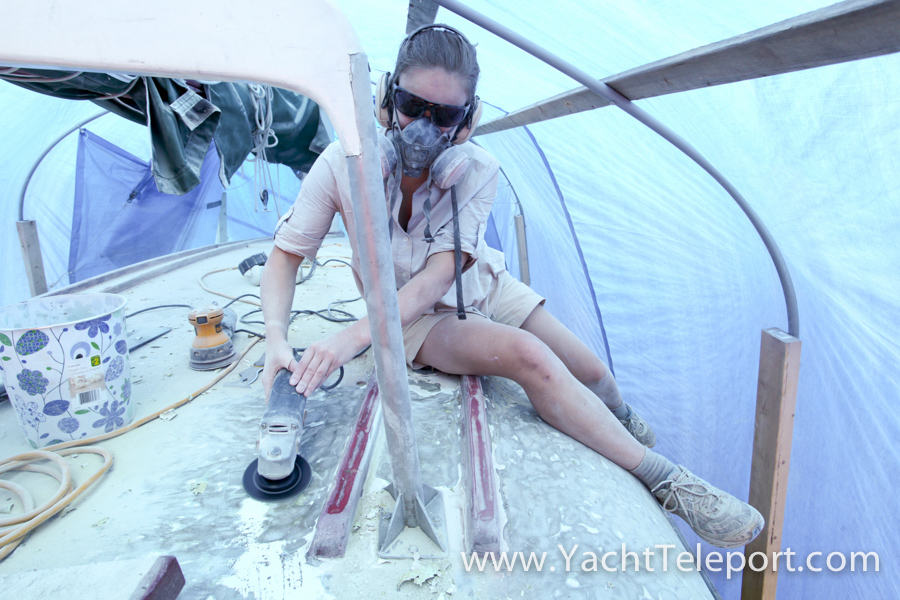 “Teleportation is defined as ‘When an object disappears from one place, and reappears in another’ – and that, in a nutshell, is what sailing is all about…”, Chris about the naming of his boat. 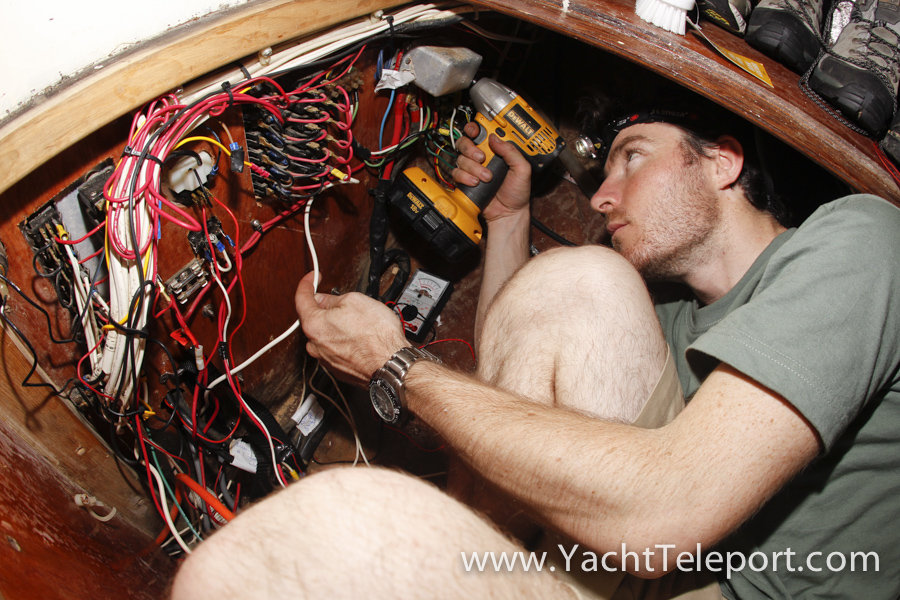 Check out the video of the whole re-construction and the longingly-awaied launch of Teleport.

However each problem only showed itself in stages, and so we persevered for three months of slave labour, working well past midnight each night, just Jess and I rebuilding this thing, with the help of a few super friendly locals, and eventually we got her ready to launch by the end of the 2010 summer. We only had just enough time to check she floated (yes) and take her on a few quick sea trails before the season end and we had to go back home to work for another 8 months, returning in 2011 to set off on another adventure of a lifetime – sailing this tiny little 29 foot junk rigged sailboat through the Northwest Passage – over the top of Canada and Alaska, through the infamous ice-bound route. 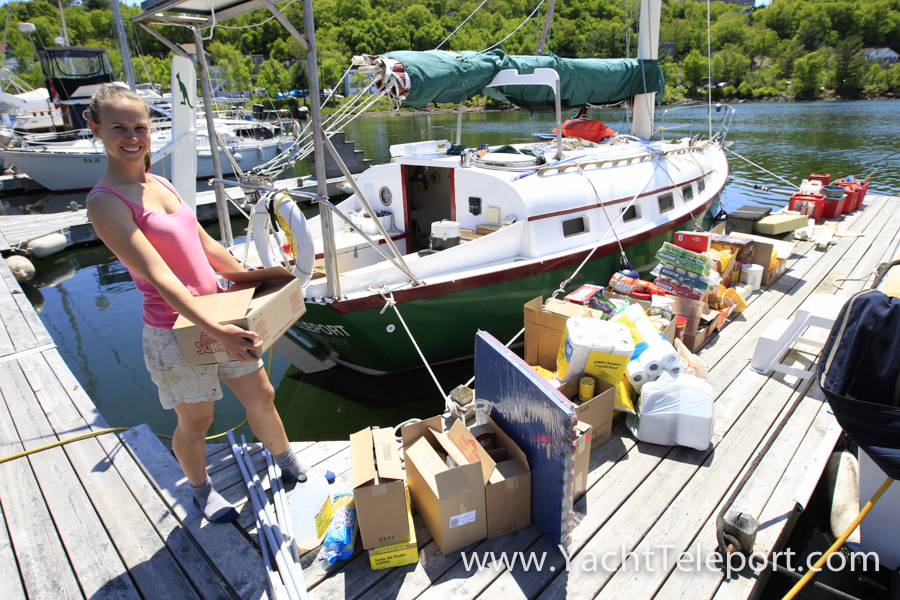 We stocked Teleport with 4 months of food and headed off up the coast on Canada, across to Greenland (where we got thoroughly beaten-up by a horrifying force-12 storm with 12 meter waves) then up the coast of Greenland filled with icebergs, and back across Baffin bay to Baffin Island to the start of ‘The Northwest Passage’, full of amazing wildlife including polar bears, killer whales, seals, etc. Just amazing. 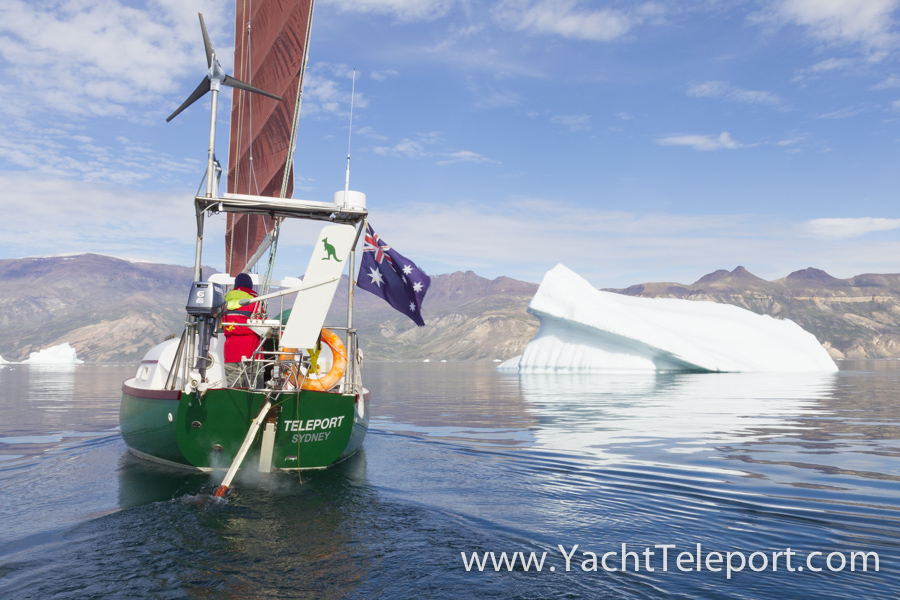 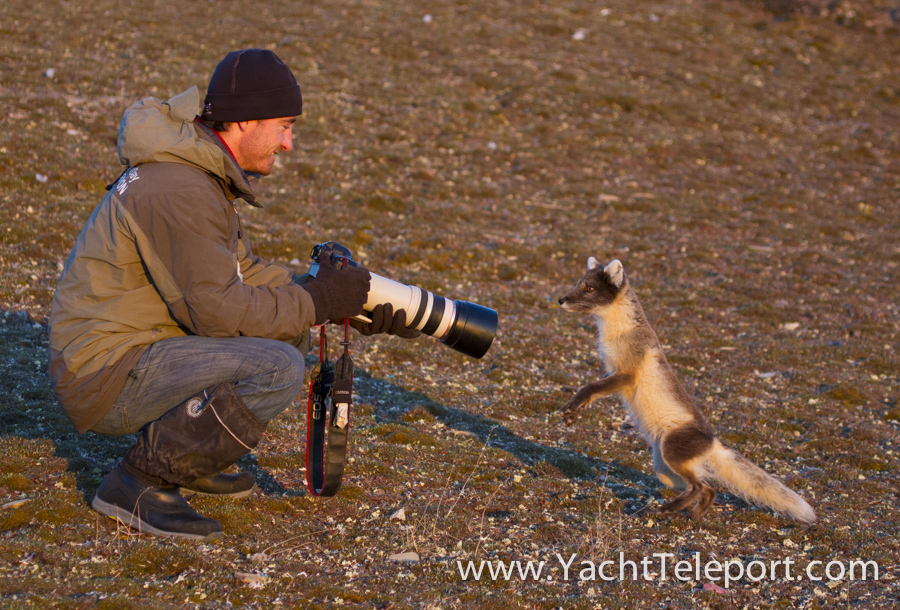 Chris now 27, living in Sydney, Australia, was born into a life of adventure – sailing around the world for 5 years with his family on their homemade yacht Starship. 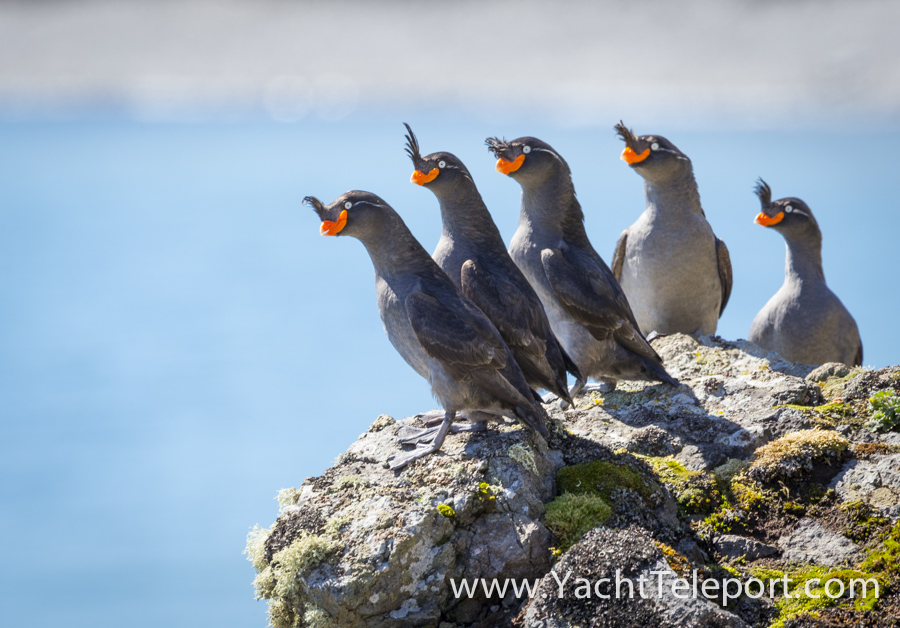 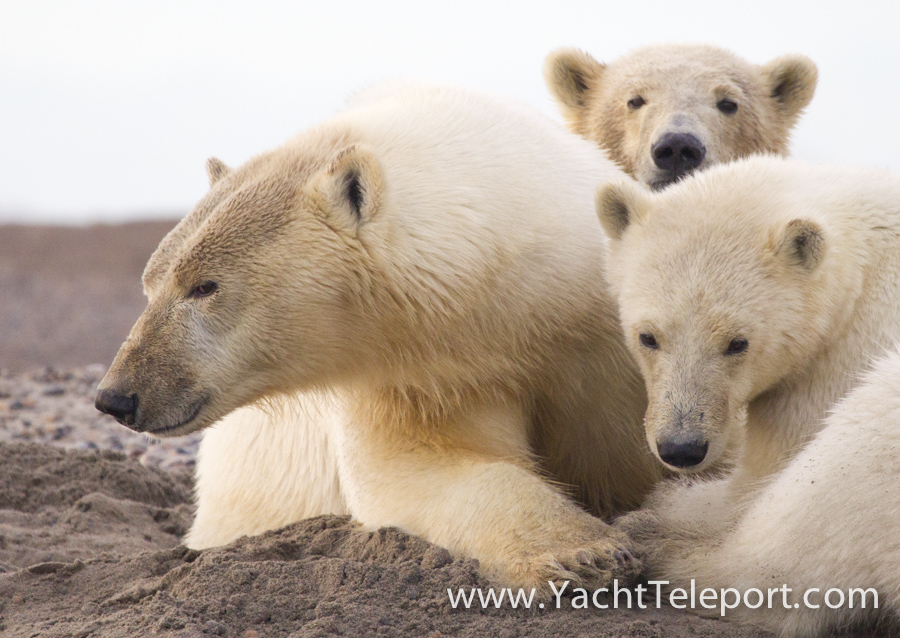 We wintered the boat on a hillside just out of Cambridge Bay on good ol’ Victoria Island where Clark and I already had many friends who could help Jess and I with wintering logistics (such as finding an old leaky crane to lift Teleport out of the water and onto a wooden cradle we’d built for the -60c degrees winter, safe out of the crushing pack ice). 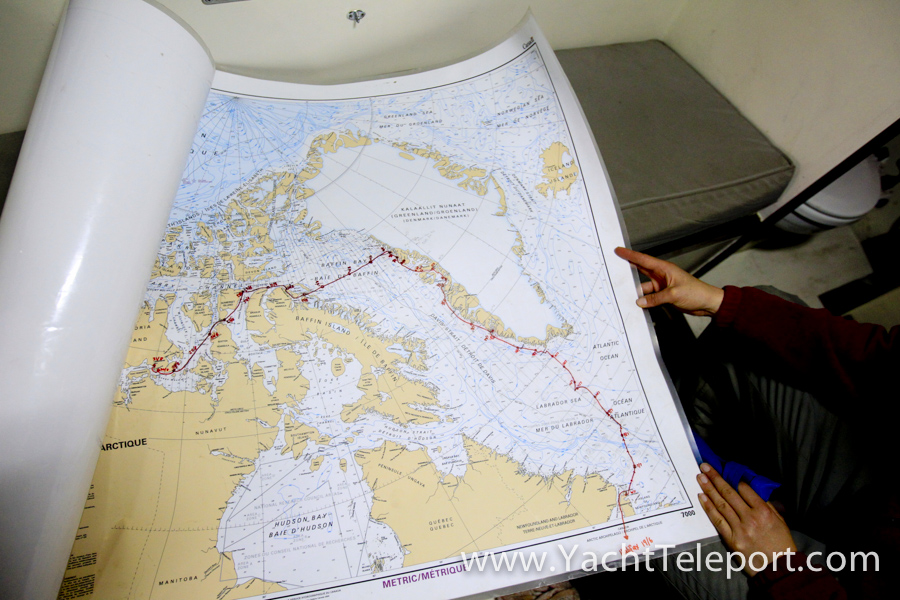 The Canadian Northwest Passage, a waterway that requires crossing the Arctic Circle twice. Once each in the Atlantic and the Pacific Oceans.

Jess and I flew home again to work for another 8 months – in addition to running 1 day photo courses around Australia, we run photo safaris around the world, taking small, private groups of photographers to the world’s most wonderful places, including Galapagos, the Amazon or Kenya.

Chris Bray
Chris Bray is an award-winning Australian Geographic photographer, Lowepro ambassador and Canon’s Australian ambassador for five years. Together with his wife Jess Bray he runs photography courses and photo safaris around the globe. Chris is also founder and CEO of Conservation United, crowd-funding the world’s critical conservation projects.

Close to the action 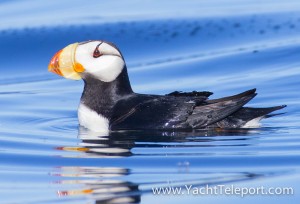