It all started with a satellite image. In 2012, freeriders Matthias Mayr, Matthias Haunholder (alias Hauni) and Phil Meier saw a mysterious crater lake on Google Earth with a perfectly formed volcanic cone at its center. Three years later they took off, determined to be the first to master the volcano on skis. The setting of their expedition: Онекотан—an isolated island in the middle of the Pacific Ring of Fire. 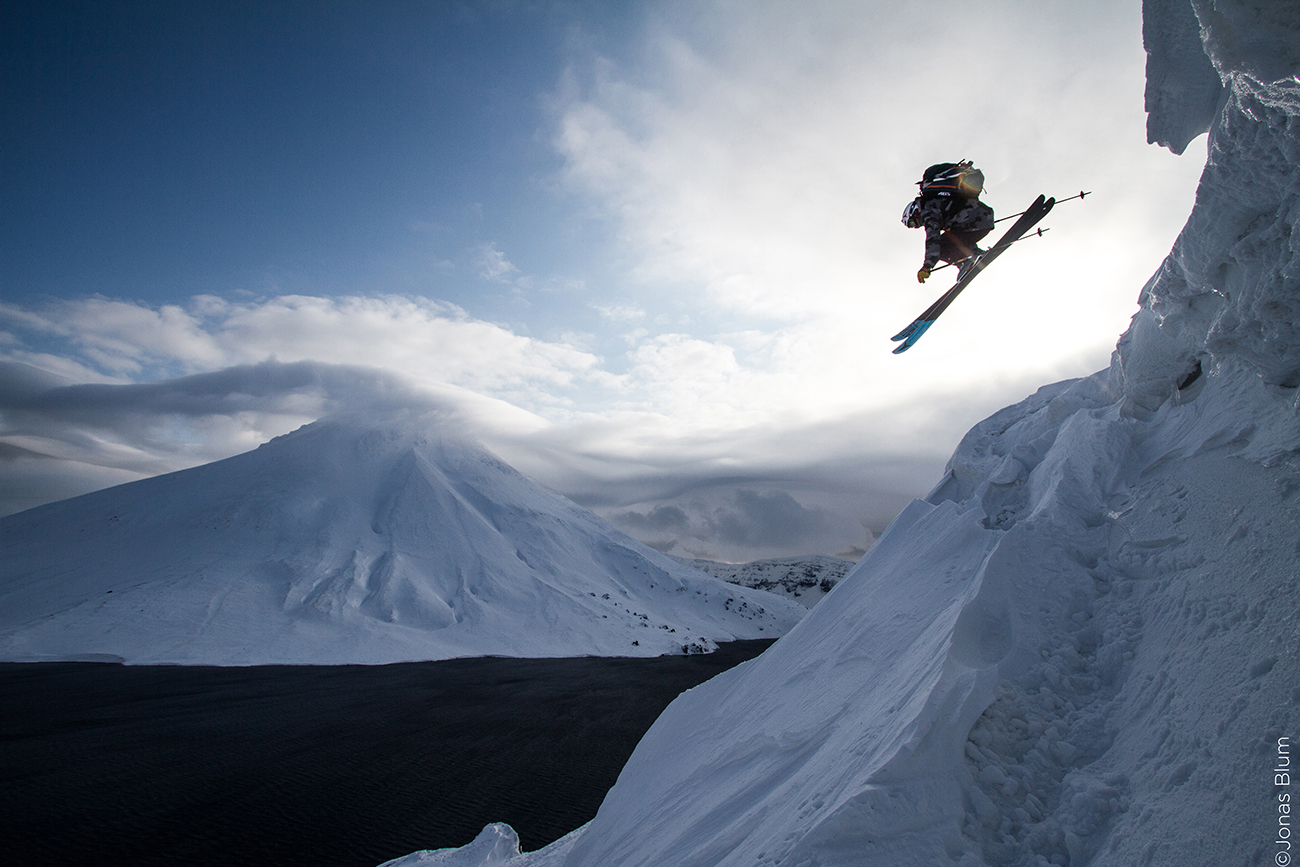 Finally Freeriding on Onekotan: Matthias Mayr on his first jump into the crater

“The island’s unique beauty, the fact that it’s uninhabited and that we couldn’t find any winter images online was reason enough to plan a ski expedition to Onekotan,” says Matthias Mayr, a professional freerider from Salzburg, Austria.

The athletes’ daring plan: to master a wintercrossing of the hopefully frozen crater lake in the island’s interior on skis, be the first to climb the steep Krenizyn volcano jutting out from the middle of the lake and then ski down its virgin slopes. “It was the first time that we wanted to go somewhere, where no one had any previous experience to draw from and where we couldn’t simply be rescued.”

In late March 2015, after countless months of preparation and survival training, the three freeriders land on the Russian Kamchatka Peninsula to continue to Onekotan by boat. But they soon encounter their first major obstacle: No one wants to take the Europeans to the uninhabited island located 500 kilometres offshore.

The local fishermen are too afraid—for their boats and for their lives. In winter the ocean is studded with razor-sharp ice floes, wild storms rage across the entire region and the water temperature this far north in the Pacific hovers just above freezing.

A number of negotiations and a wodge of roubles later, the team manages to find an official government freighter willing to take them to the island—accompanied by the Russian national anthem blaring from the ship’s sound system. After a 30-hour trip Matthias, Hauni and Phil finally near their goal with their nerves on edge. 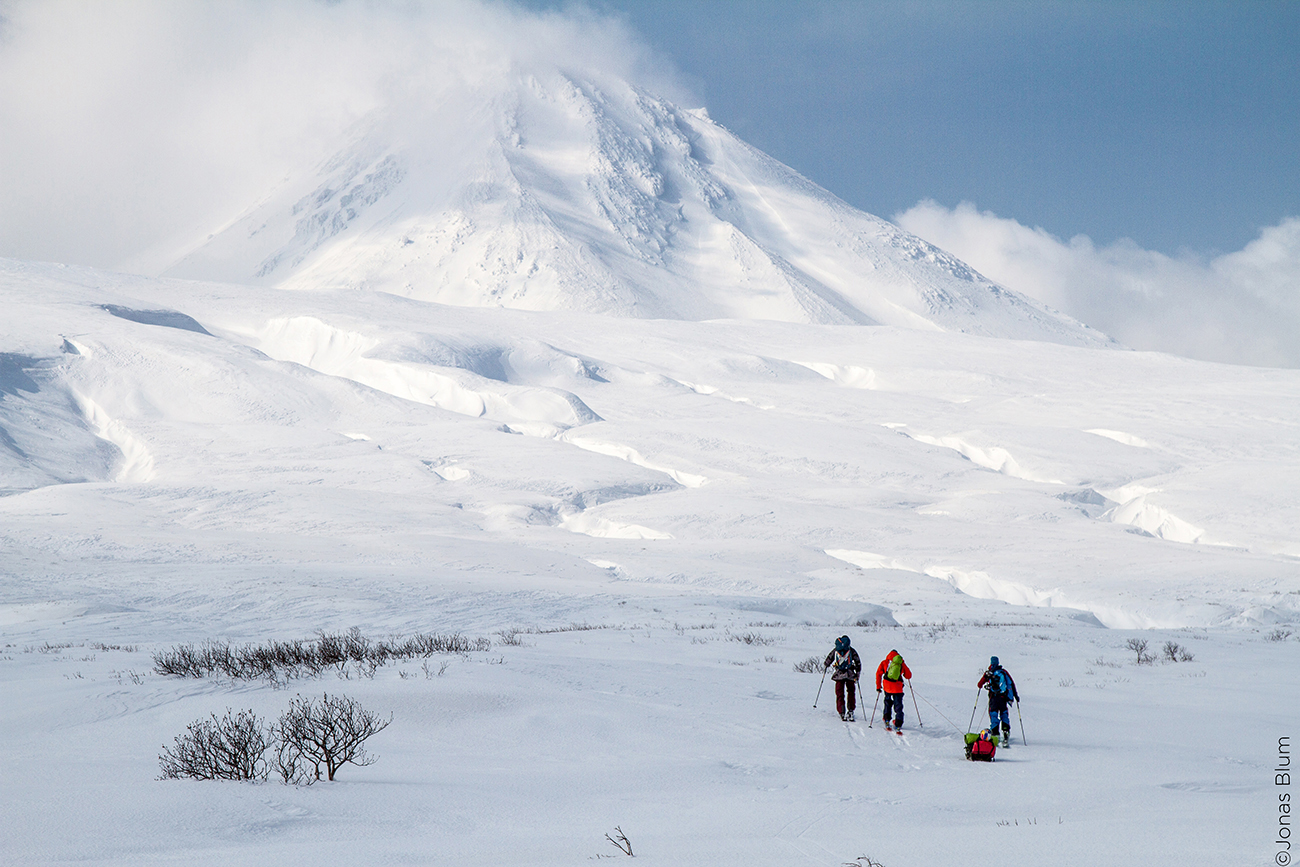 The heavy waves had threatened to capsize the ship more than once. By the time the freighter’s small dinghy has dropped off the team on Onekotan’s black volcanic beaches and starts disappearing on the daunting horizon, one thing is perfectly clear to everyone: From now on they are completely on their own!

Alone on the island

The athletes spend the next few days setting up a weatherproof base camp and exploring their surroundings. This time of year there is no one on the island except for a few curious red foxes that stop by to visit the camp from time to time.

No trees grow in Onekotan’s subarctic climate and the island is covered entirely by snow. “The wind was the biggest problem, because the storm basically never let up,” Matthias says. The very first night the tent poles break and have to be reinforced with driftwood.

On their third day on the island, Phil, Hauni and Matthias strap on their skis and begin their first recce moving towards the crater lake. But with an icy headwind of more than 130 kilometres per hour, they have to give up half way.

“Somehow the weather constantly batters us and it’s really tiring,” Hauni writes in his journal. They need a new plan and decide to set up another camp closer to the edge of the crater. 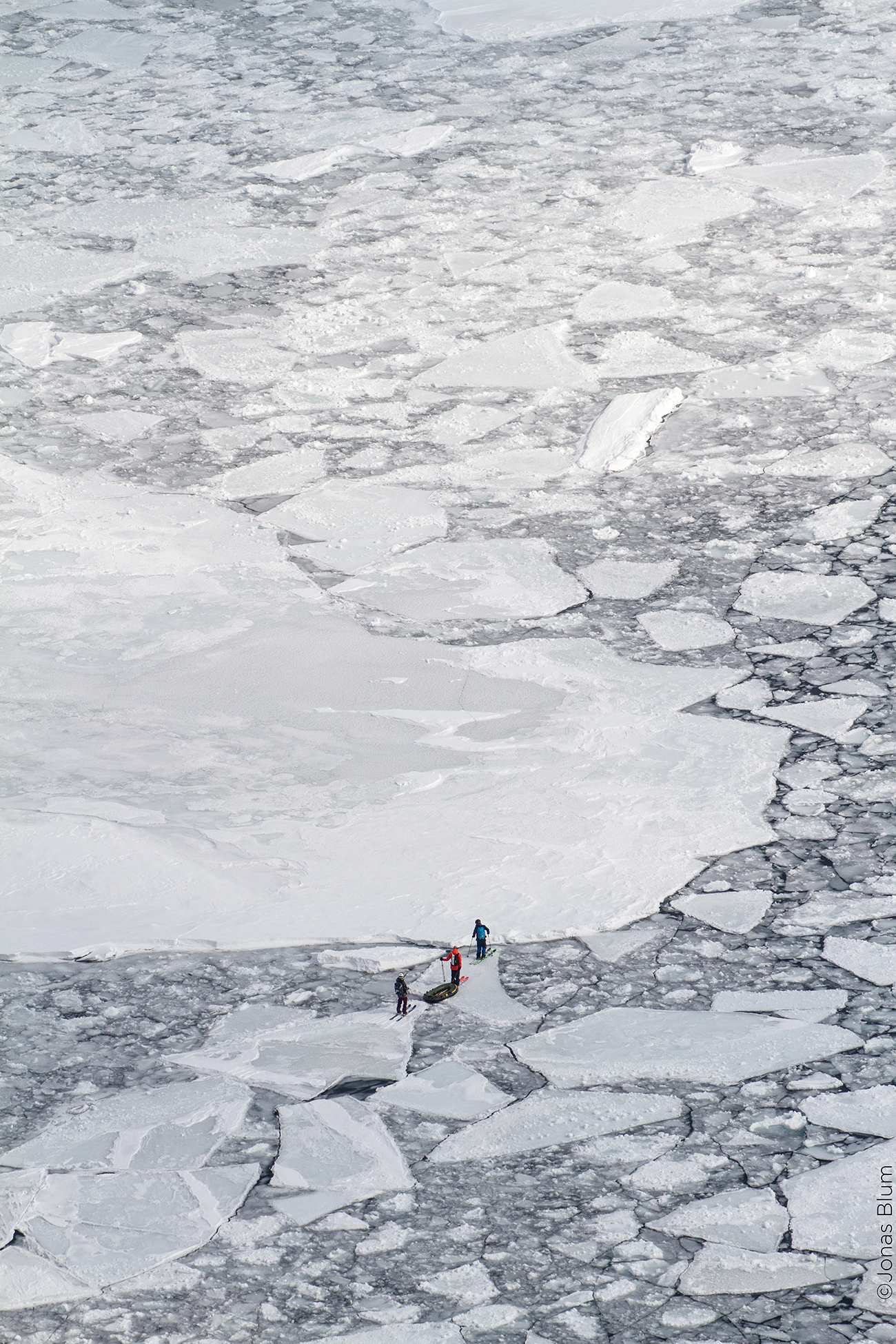 Only 30cm thick, the ice is thin—the freeriders have to be extremely careful on the way across the crater lake.

The storm finally dies down on the seventh day. Once again, the team heads off towards the volcanic cone. And then—finally—the athletes set eyes upon what they’d only seen on satellite images. “We could see the entire lake with the volcano jutting out from its center in all its glory. It was incredibly beautiful. Everyone went really quiet and just let it sink in,” Hauni later writes in his journal.

But the initial euphoria is soon followed by bitter disappointment. The lake is completely free of ice except for a small field of ice floes, putting the entire expedition at risk. What if the brittle ice floes won’t bear the weight of the athletes and they can’t even make it to the Krenizyn volcano?

The trial of fire

The next day the weather is surprisingly good, the wind has died down and the plan is clear. Today they are finally going to tackle the volcano, despite yesterday’s crushing discovery. Slowly, Matthias, Hauni and Phil run a few lines down to the crater base and examine the ice floes: They are about 30 centimetres thick and randomly piled up on the surface of the lake. If you fall in, you’re lost. The water is too cold and—with the wind chill factor it feels like -48° Celsius.

One after the other, the adventurers attach their ropes carefully to an inflatable boat they brought with them and move from floe to floe in slow motion. After what feels like an eternity, they make it to the volcano and the freeriders can start the ascent. But once again the weather turns and their old friend the storm hits them with full force. With winds at over 150 kilometres an hour it is impossible to go on. Disappointed, they decide to turn back.

Three days later, the winter weather on Onekotan is perfect and the volcano beckons. No one wants to miss the opportunity and the group starts to cross the precariously thin ice floes in the crater once more. “The ice cracked suspiciously and my heart skipped a beat,” Hauni writes in his journal. But once again they are able reach Krenizyn safely and finally make it to the summit. 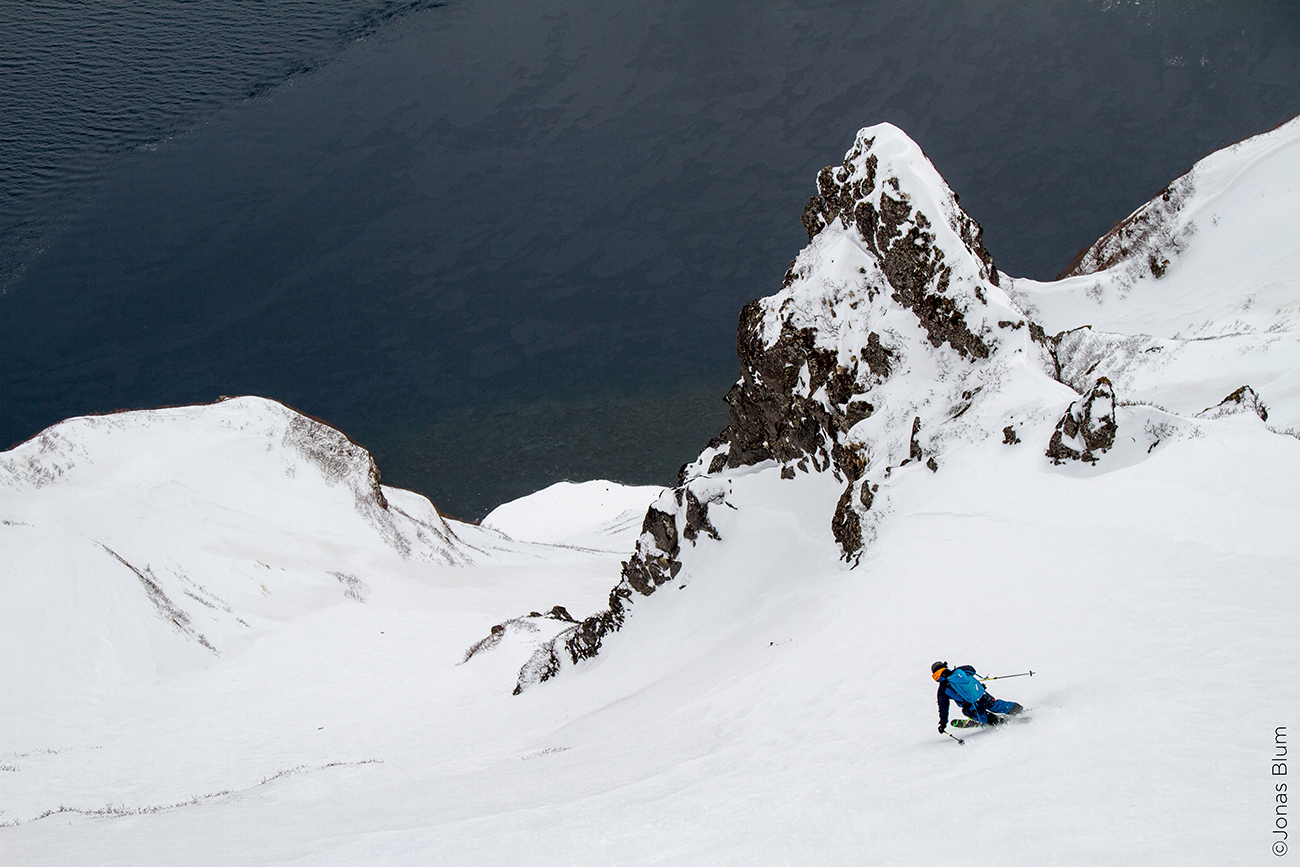 An excited high-five is followed by satisfying turns along the perfect ridgeline of the volcano. “It was an amazing, magical moment,” Hauni later says safely back in camp. Phil is excited, too. “The volcano summit was the biggest reward. I felt like I was in another world.”

Caught in the storm

Less than a week later, back at base camp, all happiness has evaporated. “We’re stuck on the island and, with a cyclone brewing, our lives are in danger, too,” Hauni writes in his journal. The freighter that was supposed to pick the adventurers up from the island days ago had to turn back to Kamchatka because of a storm warning—without the freeriders on board. They’ve used up all their supplies. Their clothes are soaked through and the team’s mood is turning ice cold as well.

“It was a huge success, but also massive agony—that’s for sure!” Phil Meier

At the very last minute, they manage to call for help from the mainland via satellite telephone. The freeriders are flown out of Onekotan just before the cyclone hits. Back on Kamchatka, Hauni writes in his journal, “It will probably take a while for me to really grasp this adventure. Right now I feel emaciated, haggard and a few years older. The experience was unforgettable. One thing I can say for sure: It was by far the most intense experience I’ve ever had.”