Failed expeditions, summits unreached, team members falling out with each other—it’s all part and parcel of alpinism and really nothing new. But rarely is it documented as honestly as in DOWN TO NOTHING, a fi lm about defeat—defeat on the mountain, the failure of a team and quintessentially a fi lm about letting yourself down.

Hkakabo Razi challenges the team not only physically but mentally.

“I’ve been thinking about Hkakabo Razi for more than ten years”, says Hilaree O’Neill, a prolific alpinist with a burning passion for adventure. Although the peak at 5,881 m, situated in the far North of Myanmar, was summited by Japanese and Burmese climbers in 1996, Hilaree had a different route in mind. Besides, she wanted to capture images of the highest peak in Southeast Asia. “Up until then, we hardly had any useful photo material of the peak! That’s part of what made Hkakabo Razi so unique and mysterious to me”, Hilaree says. For years the political situation in Myanmar made any expeditions to the remote Eastern Himalaya impossible.

When Hilaree first met National Geographic reporter Mark Jenkins at Everest in 2012, the dream of Hkakabo Razi was once again within reach. At Everest basecamp the two of them decided to attempt the peak in classic expedition style, by travelling from Yangon in the very south of the country towards the mountain in the north, by any means necessary. Hilaree took the leadership of the expedition and selected a team of top alpinists. Cory Richards, filmmaker Renan Ozturk and climber Emily Harrington joined Mark Jenkins to make up the climbing party. 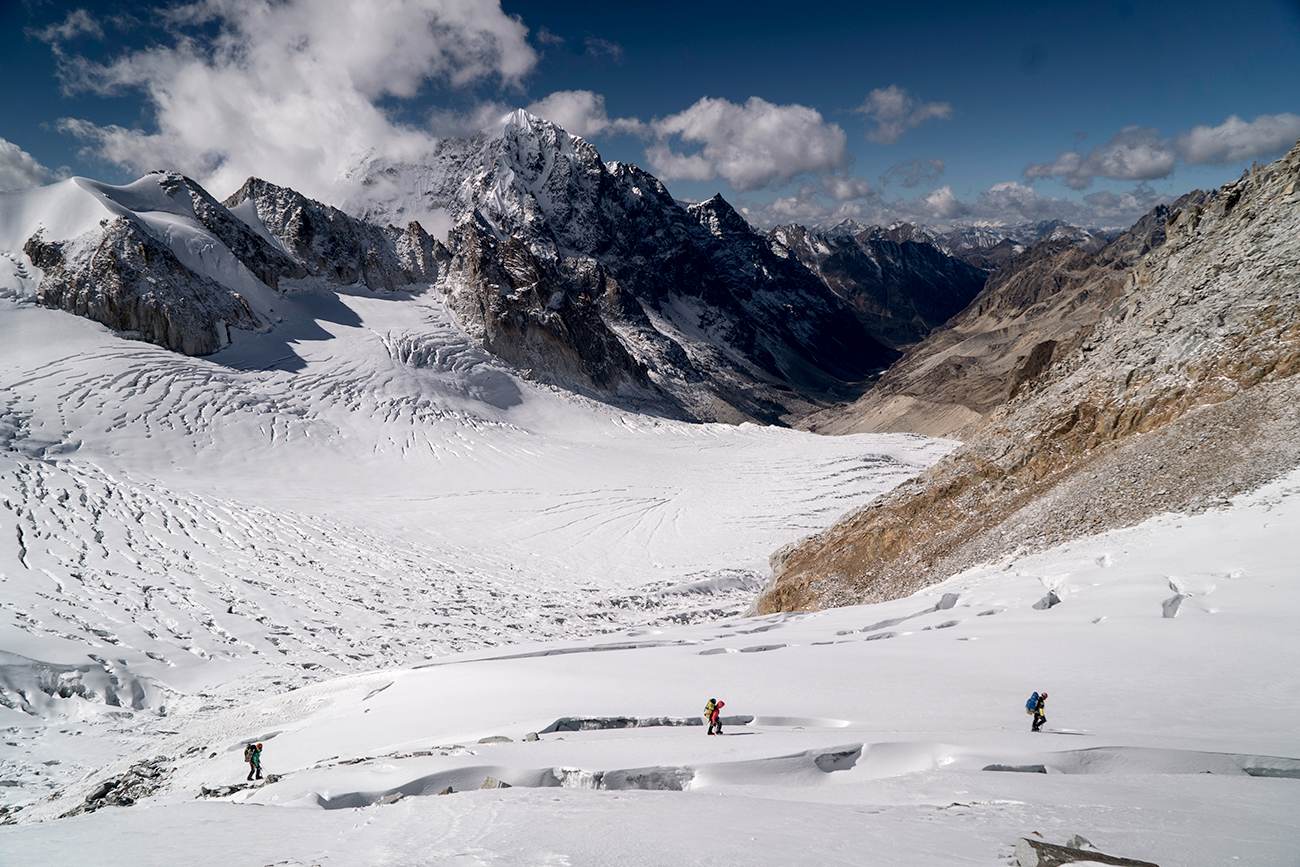 Above base camp the landscape gets rougher. The climbers fight their way up through ice and snow.

In the fall of 2014 the expedition team hit the road. “In the beginning, the team had a great dynamic, we laughed a lot and were a great unit”, Hilaree remembers. But soon the plan to travel from the former Burmese capital, Yangon, turned into a real nightmare. “The trip was completely insane and mu ch more complicated and extreme than we anticipated!”, Hilaree admits in retrospect. The team travelled a total of 1,300 kilometres by bus, boat, motorbike, air and on sketchy trains. After two weeks of travelling they reached the starting point of the trek, already exhausted. The next challenge awaited them: In the thick of the Burmese jungle, getting enough porters to carry the team’s equipment to basecamp proved impossible. The climbers had to leave a large amount of their sorely needed equipment and food supply behind. “It was at that point we all had to admit that this undertaking was spiralling out of control”, Hilaree says.

What followed are two nerve-wrecking weeks, trekking the endless ups and downs of the Himalayan foothills with heavy packs along overgrown jungle paths. “When we reached basecamp, we were completely exhausted— very hungry, depleted and pretty insecure.” For expedition leader Hilaree the situation was particularly challenging. Despite having led many successful expeditions, Hkakabo Razi posed an extraordinary stepping stone in her career as a team leader. To see her dreams start to crumble with her goal within sight really got to her. The first ripples of self-doubt started to surface. “It was incredibly hard for me to see so many things going awry—’specially because I had invested hundreds of hours in the planning and you should think: The more time you invest in it, the better it works out. But unfortunately that wasn’t the case. Not at all!”

Time and time again they lose their way on the treacherous terrain before reaching high camp at around 5,500 m altitude.

A few days later, shortly after leaving basecamp, a new fault-line appeared—this time about the choice of route. Hilaree decided to trek up a steep snow face, which Cory deemed way too precarious. In retrospect Hilaree appreciates his fear: “It was Cory’s first expedition since his panic attack on Everest and the avalanche on Gasherbrum II, which he survived by the skin of his teeth. In our team there was a pool of trauma, motiva- tion and hopes, bubbling under the surface! I wish I had done a better job observing and dealing with all those things at the time.”

Over the next few days, the climbers fought through ice and snow, going higher and higher. Mark Jenkins was particularly ambitious. “He was driven to reach the peak in a way I’ve never seen in anybody before”, Hilaree says. It was only weeks later that she understood why. Years before, Mark had been to Hkakabo Razi with two of his best friends and wanted to summit the peak to commemorate them, as they had died after their joint trip. “

And despite of leading the expedition, I didn’t know about Mark’s story. I only learned about that after returning from the trip.” After five days of exhausting climbing across glaciers and up rock faces, the team reached high camp at 5,500 m to be greeted by freezing 100 mph winds. Ahead lay a steep, thin and technically challenging ridge line, leading to the peak of Hkakabo Razi. A three-person team was chosen for a speed attempt on the summit in the early hours of the following morning. Emily volunteered to stay behind. But the other four quarrelled about who would be part of the summit team.

“You think I cannot do it and that I’m strong and fast—fast enough, so we can make it?” (Hilaree O’Neill).
“You take this personally.” (Mark Jenkins)
“Of course I do (…) Fuck you Mark for the vote of confidence!” (Hilaree O’Neill)

(excerpt from DOWN TO NOTHING)

When Hilaree realised that the three men wanted to make a summit attempt without her, she was furious, deeply hurt and felt overruled as team leader. “They simply told me their decision and did not include me in the discussion.” She felt her skills were being questioned. “Right from the beginning the other saw me more as a ski alpinist than a proper alpine climber. I really worked my ass off and would have been just as strong and able as the other three. I think, Mark had made that decision weeks before.” That’s an assumption which Mark continues to refute. “Hilaree was severely hypothermic the day before and the decision was simply about the strongest team for the summit attempt”, Mark insists. 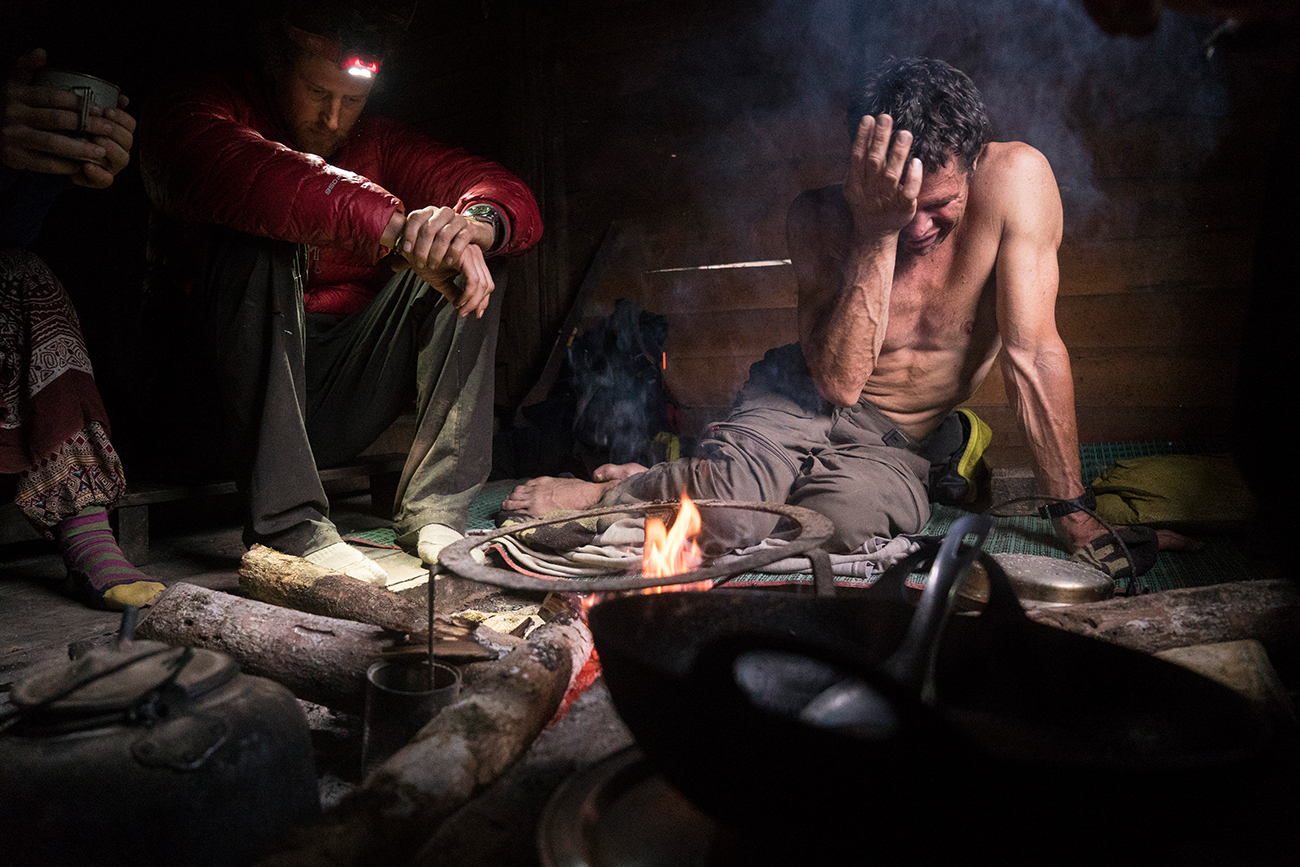 It’s not just Hilaree who’s devastated by the defeat on the mountain: Mark Jenkins (right) and Cory Richards (left) are scarred by the ordeal of the climb

Heavy winds, excruciating cold and tricky climbing sections forced Mark, Renan and Cory to abandon their attempt just a few hundred metres shy of the summit. The climbing party set out on the descent depressed and disunited. Exhausted and emaciated, Hilaree returned to her family in Telluride and fell into heavy depression. “The Hkakabo Razi expedition almost broke me”, says the woman who was the first to summit two 8,000 m peaks within 24 hours and was part of more than 35 expeditions. “In Myanmar, my self-esteem was constantly challenged: by the travel to the summit, the jungle, the team and the unknown. It left me feeling extremely vulnerable.”

It took months for Hilaree to get back on her feet. She hasn’t led any expeditions since. “After my return home, I blurred out my passion for the mountains completely and considered giving up expeditions all together.” Only now, two years after Hkakabo Razi, she feels stronger than ever. Her conclusion is this: “Sometimes it’s not so much the mountain but the dynamics of relationships, which decide on an expedition’s success or failure.” Despite it all, she wants to return to Hkakabo Razi—not now, but at some point in the future. “It would be a shame, to not use all the knowledge, that we worked so hard to get, for a future attempt …”