The Beriman River is one of the last uncharted wild water rivers on the planet and it really lives up to its nickname—the Grand Canyon of the South Pacific: From its source in the remote Nakani mountains the river carves its way down 1,000 m in altitude, plunging down massive waterfalls and roaring through 13 narrow gorges to the Salomon Sea. In June 2015 four kayakers attempt the impossible and take on the unprecedented challenge of paddling the Beriman. 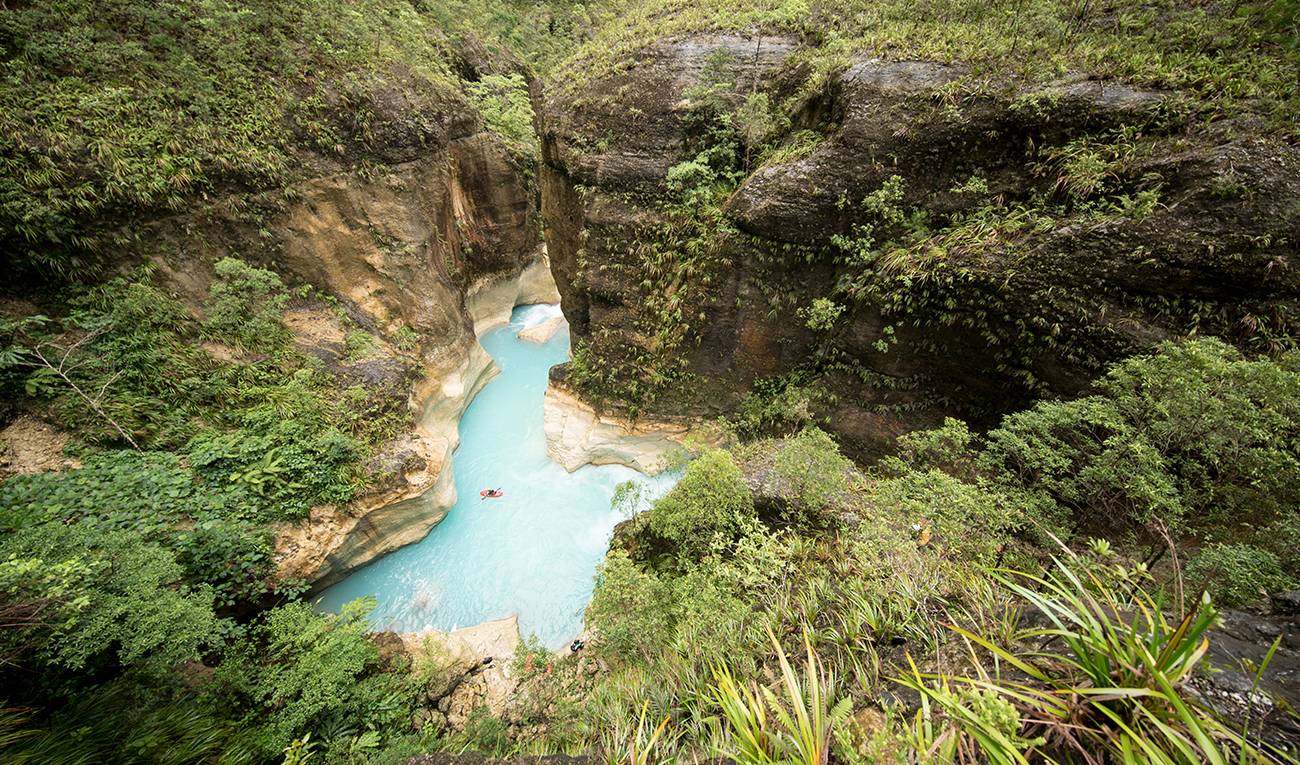 The only way out is through: The Beriman river has carved its way deep into the rock faces in the Nakani mountains of Papua New Guinea.

Three men stand in the pouring rain on an overhanging rock ledge. The Beriman river thunders beneath them. In a united effort they haul up the rope, to which their paddle buddy Pedro Oliva and his kayak were attached just moments before: The rope is severed and Pedro is gone! The three kayakers look at each other in disbelief, panicking. They peer over the edge where the drama unfolded just a few seconds ago: As Pedro abseiled down to the river, the rope catches a carabiner holding his kayak. Trapped by the currents Pedro capsizes. Pushed against the walls of the narrow gorge and he desperately searches underwater for his knife. In the nick of time he finds it and cuts the rope loose to save himself.

“This was definitely the most extreme kayak expedition, we have done!”, says kayaker Chris Korbulic in hindsight. “Almost the biggest challenge for me was just getting started. Committing to start the whole thing! The hardest part was just saying YES and not turning around and walking away.” And they almost did turn around around, because upon their arrival in the heart of Papua New Guinea the heavens open—days on end of pouring rain. Their goal to be the first kayakers to paddle the 13 steep gorges of the Beriman to the sea seems out of reach. “If a flood had happened while we were inside one of those gorges, it would have been game over”, Chris states. After a week, the storms subside and there’s a good weather window. The kayakers take a helicopter to the put-in on the Beriman, high up in the wild Nanani mountains, ready for the adventure of a lifetime. Coming along for the ride are filmmaker Ben Stookesberry, kayakers Chris Korbulic and Pedro Oliva and worldclass paddler Benny Marr. Once on the river, the only way out is through—‘til they reach the sea. Aborting the mission mid-way in the inaccessible, jagged gorges of the Beriman is impossible. But the team’s spirits are lifted by the confidence and paddling skills of Benny Marr: “He is just a really exceptionally good kayaker. And on the Beriman it was really key to have Benny there just to look at a line in a rapid and say: ‘Yeah, that’s good. It goes and I’ll run it first’.”

“My parents said: Don’t do anything stupid, understand your limits, know what you want to do and take risks to achieve those things.”

But the days that follow don’t just challenge the paddling skills of the team. They were pushed to the limits of their energy. Only eight of the 13 gorges are navigable. The team has to circumnavigate five canyons on foot and with heavily loaded kayaks it’s too risky to enter uncontrollable rapids and thundering waterfalls. These traverses—called portages—are the biggest challenge. 1,000 metre high walls rise steeply from the banks of the Beriman, heavily overgrown with thick jungle … In the middle of the jungle on the island of New Britain lies the “Grand Canyon of the South Pacific”. The Beriman River flows from its source in the Nakani mountains to the Salomon Sea.

Wheezing up the slippery rocks with their heavy kayaks in tow, Ben and Chris fight through ferns and underbrush. Beneath them and the steep cliffs a particularly wild section of the river roars, just before it drops into an impassable gorge. Above them Benny and Pedro dangle in the midst of a rain-slicked canyon wall, trying to scout out a path ahead. Chris is quite literally barefoot—his feet have shed the upper layers of skin and he’s suffering from severe foot rot which is eating away the soles of his feet, making walking extremely painful. Everything is soaking wet, either from sweat or the humid mist rising from the jungle. A horde of flying foxes darkens the sky. The men are completely exhausted and thirsty. And despite the extremely humid conditions, fresh water sources are nowhere to be found. Ben is also suffering with foot sores and can hardly walk at all …

“The portaging was super extreme—the hardest portaging I have ever done”, Chris remembers. “Dragging our boats up steep rocks, soaking wet about 18 hours a day and just putting on wet shoes and socks again first thing in the morning and spending all day on your feet. And one point later in the trip, I think at the eighth gorge, Ben and I could barely walk, our feet were so bad.” Heavy jungle portages, gigantic waterfalls, treacherous rapids: it’s not easy to keep the spirits up all the time.

But the portages aren’t the only price to pay. The river is relentless as well, challenging the team with class V white water: extreme rapids, narrow passages and steep falls of the hardest white water category out there. The narrow gorges are incredibly dangerous and unpredictable. “One of the keys to being able to paddle this river was having flown over it. Aerial scouting meant we knew places where the river was possibly going underground. So we didn’t have to deal with the fear of coming around a corner to see the river disappearing. That would be totally scary, so we made sure we didn’t have to deal with that situation,” Chris says.

“We put-in on the river on my birthday. It was a perfect way to celebrate.”

But nothing would have worked on this expedition without great team work. “That was greatest thing about our team that we were all willing to take the lead at some point and to sit back and watch somebody else take the lead when they were the best suited for it,” Chris says. “There are definitely egos at play among us in the group, but I think in a special way everybody’s ego gets checked pretty hard by the river. The team dynamic is among all the shared skills. Each person brings their own expertise and you just have to be willing to balance those things. I think there is something special about the river that it completely requires a little bit more humility and a little bit better teamwork, conceding and compromising to be successful.”

Chris Korbulic during one of the many portages in the Beriman Gorge. The team had to fight through thick jungle, dragging and carrying their kayaks along for days to circumnavigate the most treacherous parts of the river.

Before long the jagged rock faces along the Beriman have dissolved into soft banks of vegetation. Just a couple dozen paddle strokes and then—The Pacific Ocean! The kayakers take a deep breath, smell the fresh salty air and get emotional reflecting on what they have achieved. Deeply moved and incredibly happy Chris, Ben, Pedro and Benny paddle from the Beriman straight out to sea. They made it. After 13 days full of uncertainty, misery and fear. After many hours of pure adrenaline, hope and euphoria. The kayakers lean in for a hug and cheer for each other. Chris’s feet feel like they’re on fire. It will take a couple of days ‘til he is able to walk in shoes again. But right now he doesn’t care.

“Often on a big trip you get to the end and it’s pretty anti-climactic and even kind of disappointing because this huge thing you have been working on is suddenly over. You don’t really know what to do with yourself because it’s been so hard and demanding and you’ve been putting everything into it and then suddenly it’s over. But this was the most climactic, most extreme, amazing ending to a trip!” says Chris. “Being able to pull out into the ocean where the river dumps out onto the beach was really really amazing. And it was a true feeling of satisfaction and success and relief, definitely one I haven’t felt on any other trip!”