On their journey into the heart of the Ecuadorian jungle Benjamin Sadd and James Trundle discover adventure in its purest form only to find out they can’t escape civilization – not even in a handmade dugout canoe. 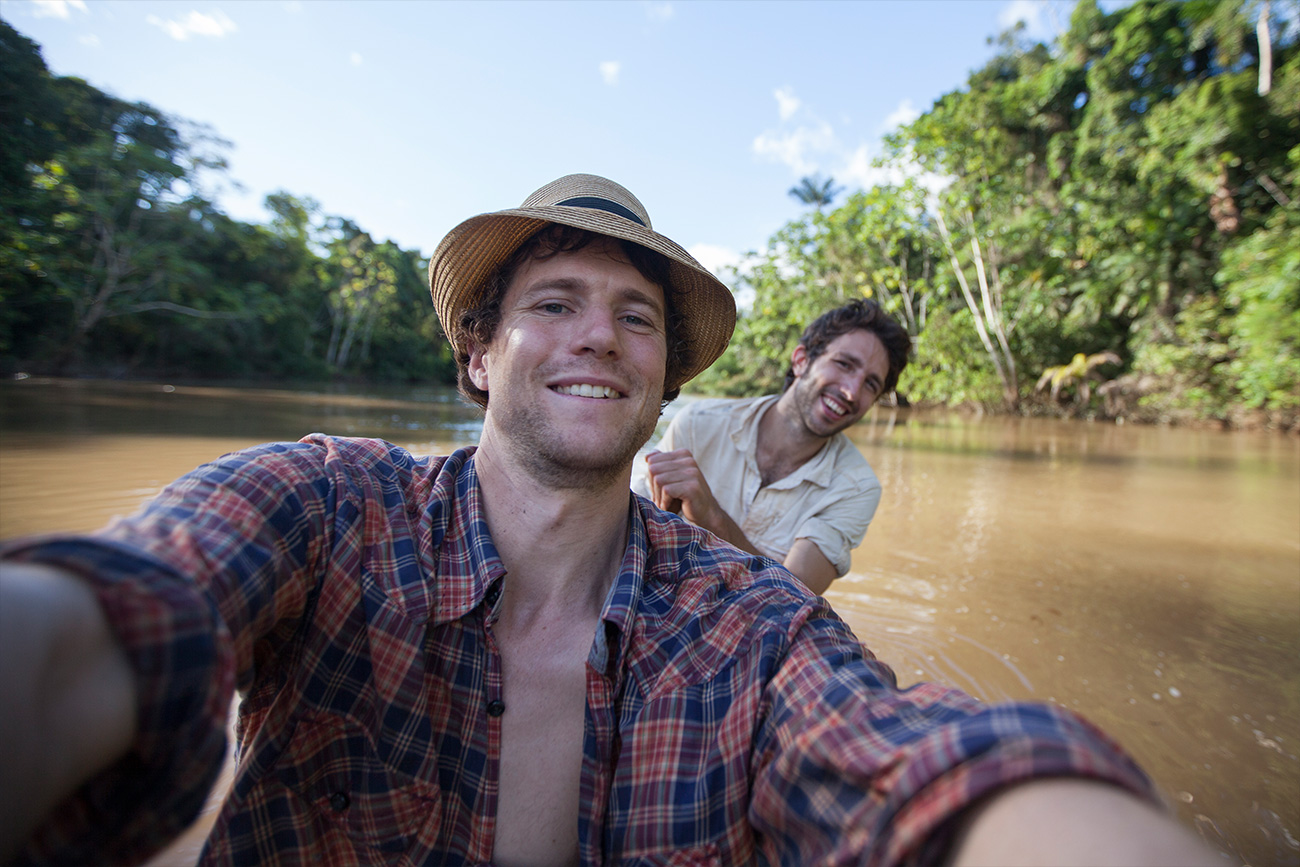 Benjamin Sadd and James Trundle wanted to spend a very unusual holiday. The two British mates have traveled to the Ecuadorian jungle to fell a tree, carve a dugout canoe, and set off downstream through the Amazon. They will spend two months with their host Bai Nenquiwi and his family, ​​sharing daily life with indigenous tribe members and working on their boat under Bai’s guidance. Sounds like an adventure in its purest form—for breakfast, banana water instead of porridge; in the evening, fried monkey instead of reconstituted pasta sauce; and instead of English tea, it’s homemade chicha of course, a traditional fermented corn beer from the Andes, dating back to the ancient Incan Empire. Might this adventure also involve a little time travel? 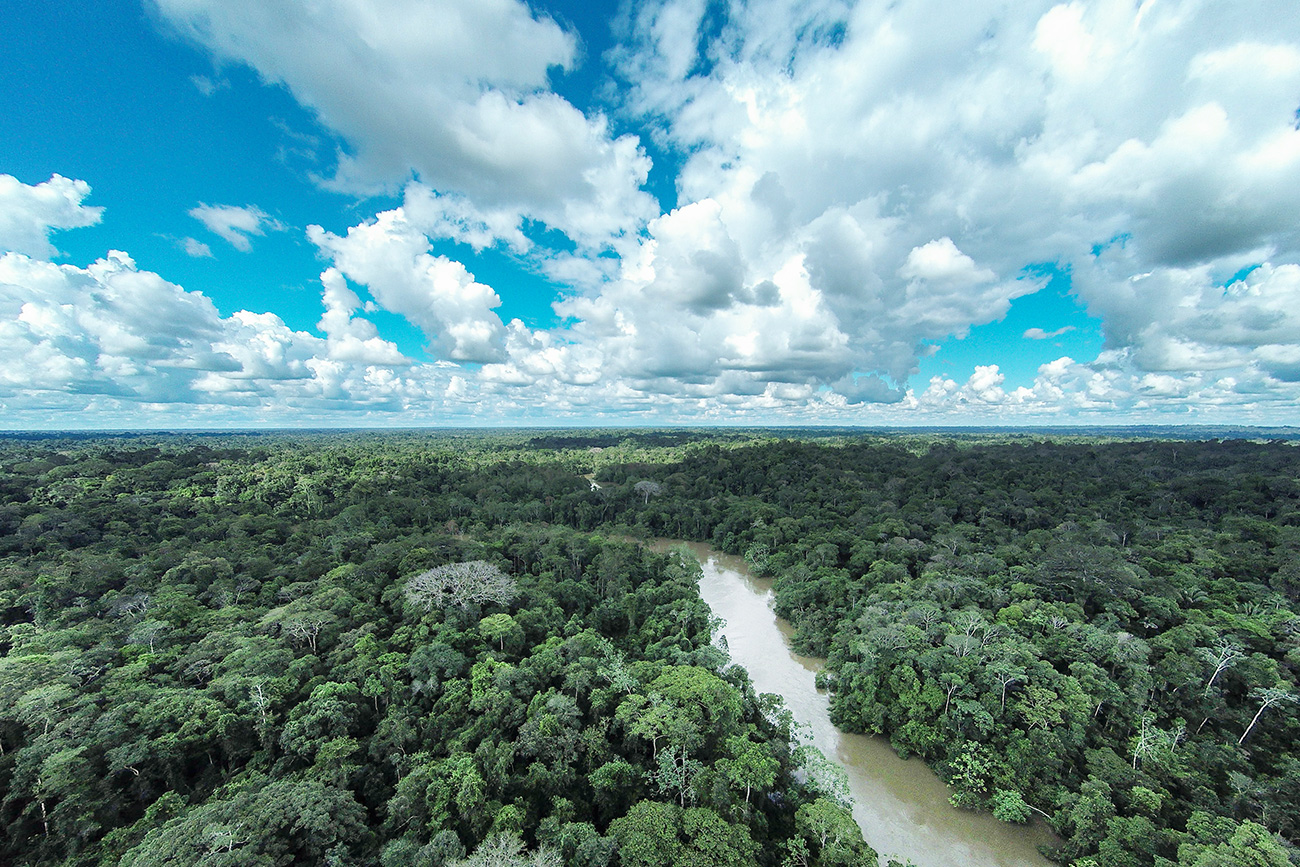 Bai cuts a notch in the bark with a machete. Up to this mark—the upper third of the massive trunk—must be completely removed. The rest of the trunk will become the dugout canoe. This type of boat has been around for over 8000 years, and although it’s actually a very simple construction—just a hollowed-out tree trunk—today, only a few people in the Amazon know how to build a it. Bai Nenquiwi is one of those people. The Huaorani man has lived his entire life in Apaika, a small village hidden in the farthest corner of the rainforest that Google Maps can’t even find. But even this remote area is not immune to globalization. When Bai looks at the smooth carbon steel of the modern-day axe in his hand, he’s reminded of his grandfather’s stone axe. Bai essentially grew up in the Stone Age and has been catapulted into the industrial and information age within a very short time. 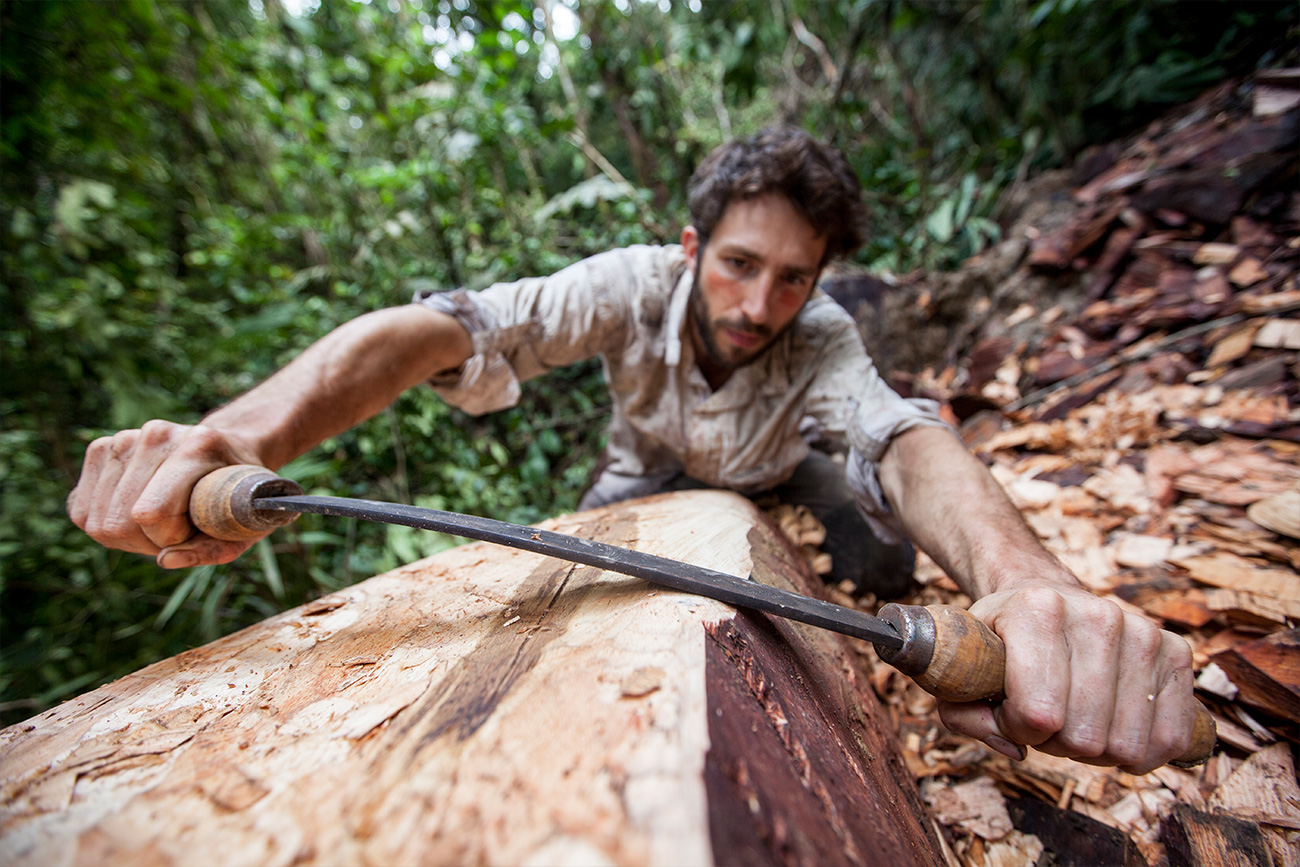 This world is where Ben and James come from. A world they want to escape via their jungle journey by getting back to basics—craftsmanship instead of technology—except for the omnipresent video camera. So, every day, they work laboriously on their dugout, ignoring the blisters and back pain, and watching with amazement at the skill and proficiency Bai has using his primitive tools. While they have to pause every three hours and take advantage of the almost daily rainfall to rest, Bai keeps going, always finding another task that has to be done. And although the two Brits have come to the Amazon for more than just a photo op, the differences between cultures could not be vaster. Exchanging contemporary behaviors for that of the tribesman is not easy, but it is necessary. The only question is whether it happens by will or by force. The outside world is moving closer and closer to Apaika via newly built roads, bringing medical care and training opportunities, but also the interest of big corporations. Bai finds it difficult to weigh the monetary value of an object. He sees himself as a hunter-gatherer, but his spears and blowguns are no longer contemporary. He knows the names of all the plants and animals that surround his home and tries to pass this knowledge on to his grandchildren. The biodiversity of this ecosystem is so extensive that the scientists still cannot fully grasp it. And yet what is underneath the forest floor is of even greater economic importance—hundreds of millions of barrels of oil. 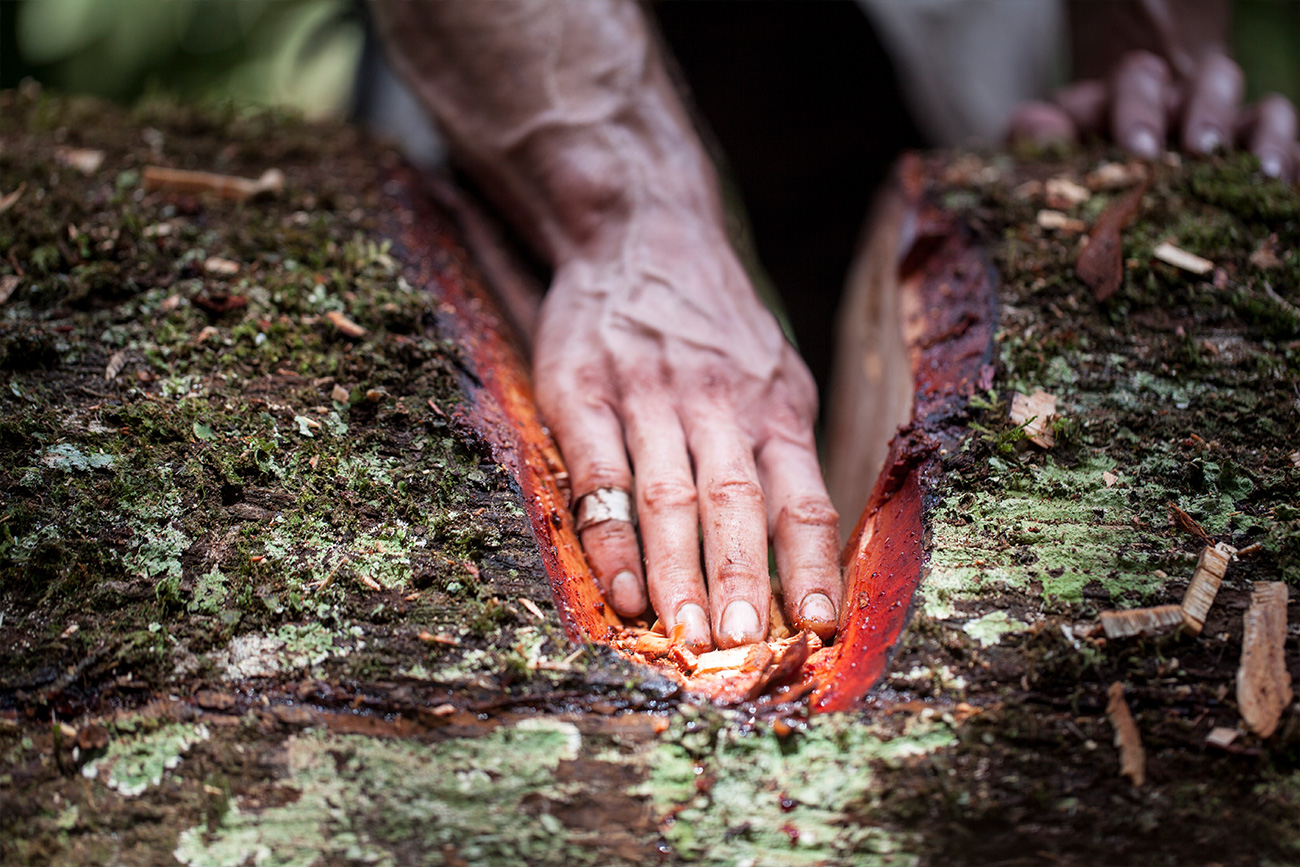 The discovery of oil brought with it inevitable changes. In 1937, Shell Oil Company tried to start oil production in Ecuador, but after a bloody conflict with Huaorani warriors, the company withdrew. The Huaorani still have their warlike reputation, especially the two tribes who migrated to a protected area inside Yasuni National Park, the so-called “Intangible Zone” established by the Ecuadorian government in 1999. Outsiders are not welcome here. Anyone who enters the zone without an explicit invitation is likely to suddenly come face-to-face with a hostile warrior. As part of their route, Ben and James are aware that they must avoid entering this zone. 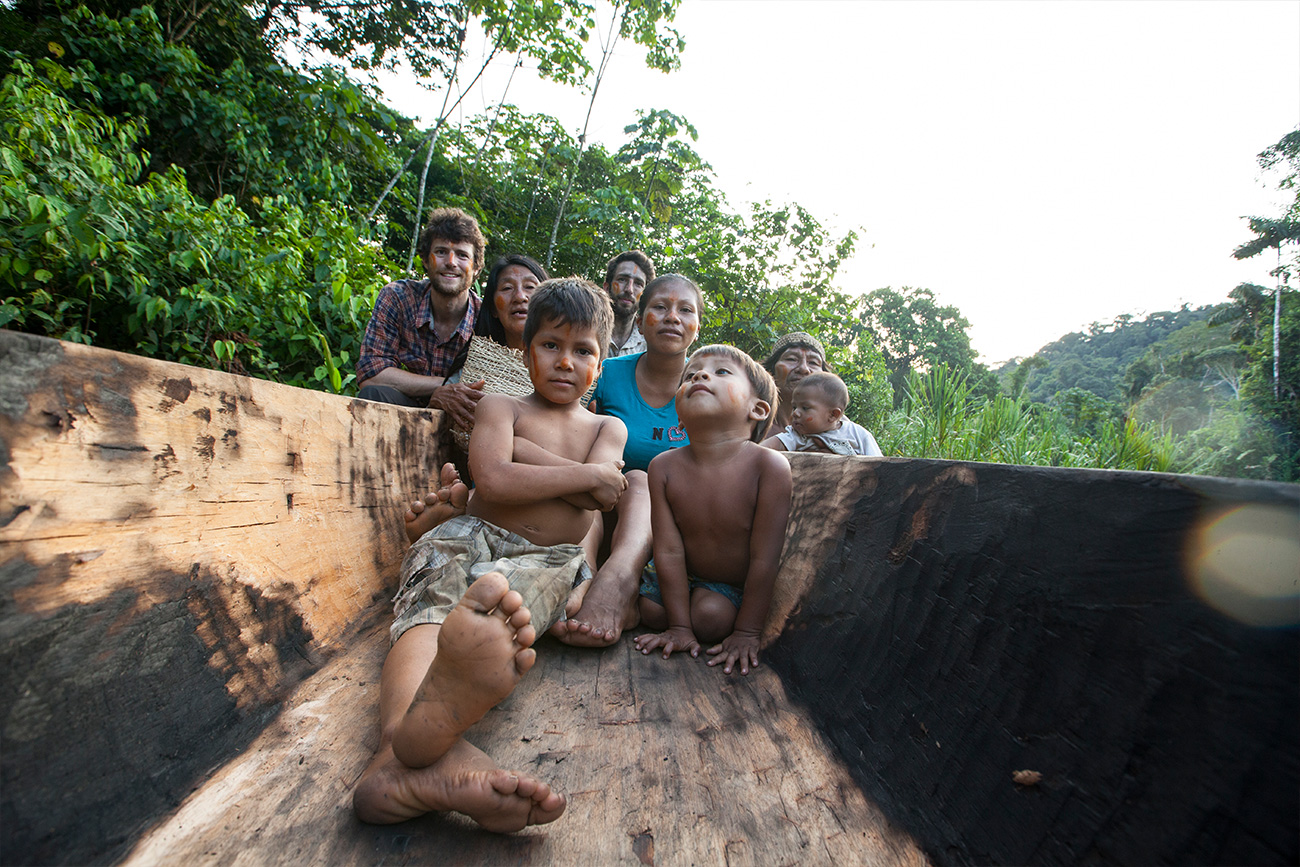 Bai and his family profit from foreign visitors who buy their handmade arrows and blowguns. Most show up just for the day and then disappear again. The Huaorani like to play up their fierce reputation for the tourists, partly because it’s what people expect from them, but Ben and James look beyond this pretense and see that the Huaorani are not running around naked all day, that the children love to play with plastic toys, and that these families face domestic challenges similar to families all over the world, like broken generators. Although it’s still possible to journey into the rainforest and build a dugout canoe, an untouched paradise where time has stood still can no longer be found. The indigenous people are forced to navigate in a world with new opportunities and increased demands without forsaking their roots. It is a challenge and perhaps an even bigger adventure. Bai’s Neck of the Woods

The small village of Apaika, where James and Ben built their dugout canoe, lies in the Huaorani Reservation near the Río Shiripuno. They gave up their original plan to follow this river all the way to the Peruvian border because they would have to pass the “zona intangible” unaccompanied. Instead they brought the canoe up north to the Río Tiputini and paddled this small and meandering river from its headwaters into the Río Napo andfrom there on to the town of Rocafuerte, where they sold their dugout canoe.