The French paraglider Antoine Girard wants to get high. Over 8000 metres to be exact. Whether his dream of flying is in the realm of human possibility, nobody knows. But if he manages to fly over Broad Peak (8051m) in the Karakoram, he will definitely set a world record. An adventure in extremely thin air.

‘Numbers are just numbers,’ responds Antoine Girard when asked about his world record. In his paraglider, the Frenchman soared over Broad Peak (8157m), higher than anyone ever before. But, to Girard, the numbers are not important. ‘Breaking records is not my objective. I do these projects primarily to get to know myself.’ 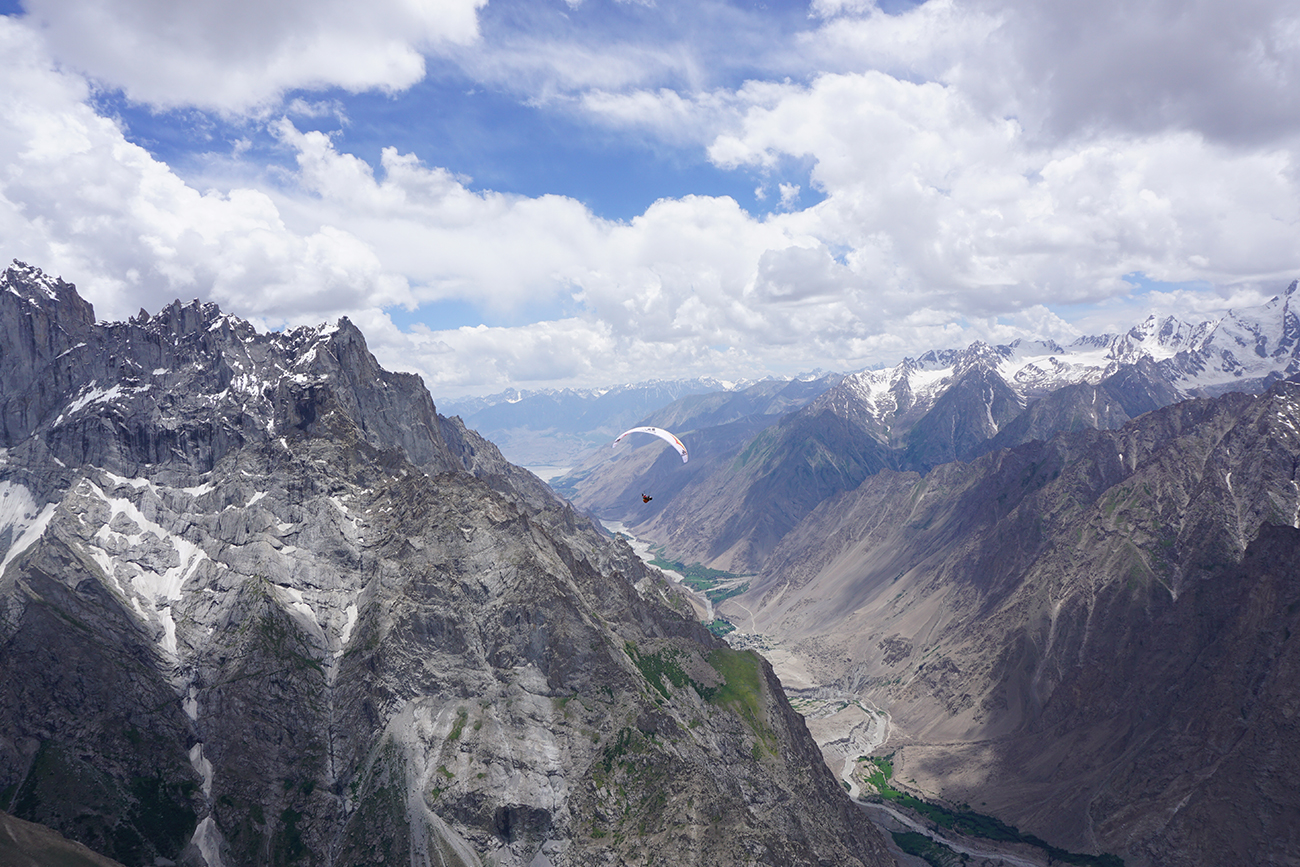 Numbers do, however, play a very important role in Girard’s professional life; the 39-year-old is a computer science professor at the University of Grenoble. He works only part-time so he can pursue his dreams—and flying is at the top of his list. After several failed attempts to climb Broad Peak on foot, Girard wants a rematch—this time, by air.

To be on top of the world, to get a birds-eye view of the world from over 8000 metres, and to fly over the highest peaks in the world—that is his goal. That’s why he makes it a point to train by paragliding in adverse weather conditions. Only those who have enough experience, who have mastered the equipment and are total experts, can venture to the icy heights of the Karakoram. It took him over a year to plan the expedition, but Girard likes to plan. ‘I’m actually very organized. I plan everything.’

But before the expedition even starts, it seems to be running off course.

Perhaps the most important number in this adventure is not Girard’s altitude record but the number one. When he sets off for Pakistan—equipped with his camera, his paraglider, and his big dream—half of the team is missing. His expedition partner cancelled just five days before the planned start. And just like that—two becomes one. This is no longer a team expedition, but a solo adventure on the edge of the impossible.

‘It was a difficult start.’ Girard recalls, ‘My biggest worry was loneliness. I wasn’t afraid for my life, but I knew that I was on my own, without a partner to provide encouragement and make decisions with me. The camera helped me cope with the loneliness.’ 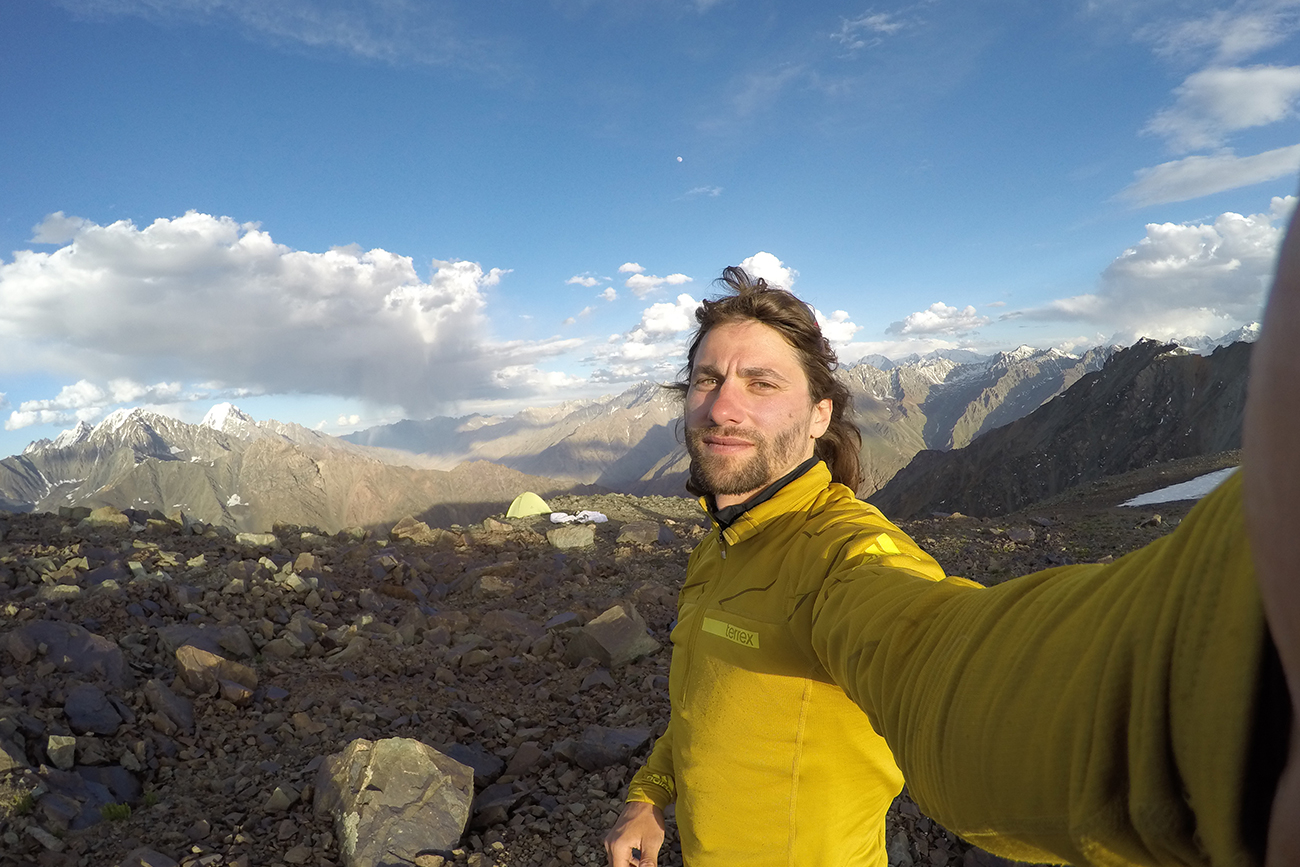 After the first flight, at about 4400 metres below Nanga Parbat (8126m), when Girard was held captive by rainy weather and stuck in his tent for days, he thought about giving up. Doubts began gnawing at the edges of his mind. Maybe this plan isn’t possible at all. Maybe you can’t do something like this on your own. Maybe there isn’t enough time to accomplish this dream. Maybe this damn rain will never stop. Waiting for better weather wore him down. Only in retrospect can Antoine Girard reflect positively on his days in the tent: ‘This time was very important for me because it allowed me to take a step back, to think about and more deeply understand why the project is so important to me. It gave me confidence. After that, I got totally into it and believed I could do it.’

Finally, the storm breaks and the clouds part to reveal a spectacular mountain panorama. Some of the world’s highest peaks appear in front of Antoine Girard—a canvas of stone, ice, and air. The sun provides him with a mental boost, and more importantly, its rays heat the rock to quickly generate the thermal uplift needed for his paraglider to soar. The paraglider, including the 35 kilos of luggage, is carried upwards by the warm rising air. The air around Girard becomes thinner, and with altitude, the air resistance also decreases, allowing him to fly even faster. 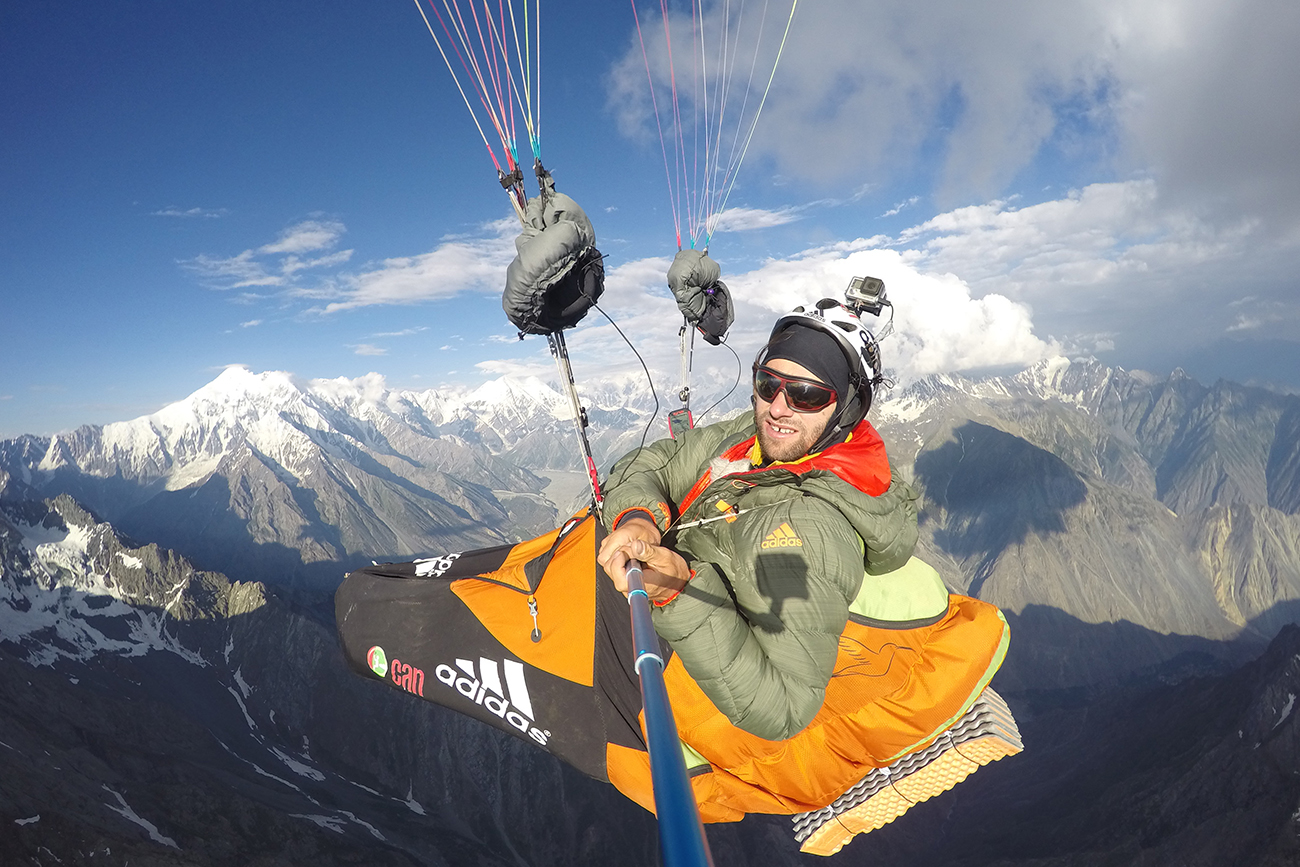 In order to make optimum use of the thermals, it’s not just sun that’s needed but also relative calm, a rare commodity amid gigantic glaciers and windy eight-thousand-metre peaks. Girard has chosen a sport in which he is exposed to the most extreme forces of nature, but that’s exactly what makes paragliding so appealing to him. ‘That’s what makes paragliding so exciting—there are so many obstacles, and I’m always curious about how I will react in unplanned situations.’

Base Camp for One

When Girard lands his paraglider, it’s usually in places where no one has yet to set foot. He perches his tent in precarious positions on rugged mountainsides, lonely and peaceful at the same time—as opposed to the overcrowded, littered basecamps at the foot of the surrounding eight-thousand-metre peaks. ‘What really drives me is the feeling of freedom. It is one of life’s great privileges to find myself in such places, looking at the stars and the landscape around me. It’s at these moments when I’m the happiest person in the world.’ But even the happiest person in the world has to eat. On long flight days and involuntary break days, Girard loses a lot of weight. Seven kilos in a fortnight. Food rations are tight; if he does not fly, he only consumes 100-150 grams of food a day, much too little. ‘I used to dream at night about eating,’ Girard recalls.

The altitude is also becoming more and more difficult for the Frenchman. His fingertips are cracked, a result of the cold, dry, and thin air. His respirator isn’t working properly anymore. Concentration is also becoming more challenging. In order to monitor his mental fitness and to calm down in tricky manoeuvres, the computer science professor gives himself mathematical tasks. ‘For example, 50 x 32. When it took me more than ten seconds to calculate the answer, I knew I had to land. If I solved it in less than that time, I could keep flying.’ 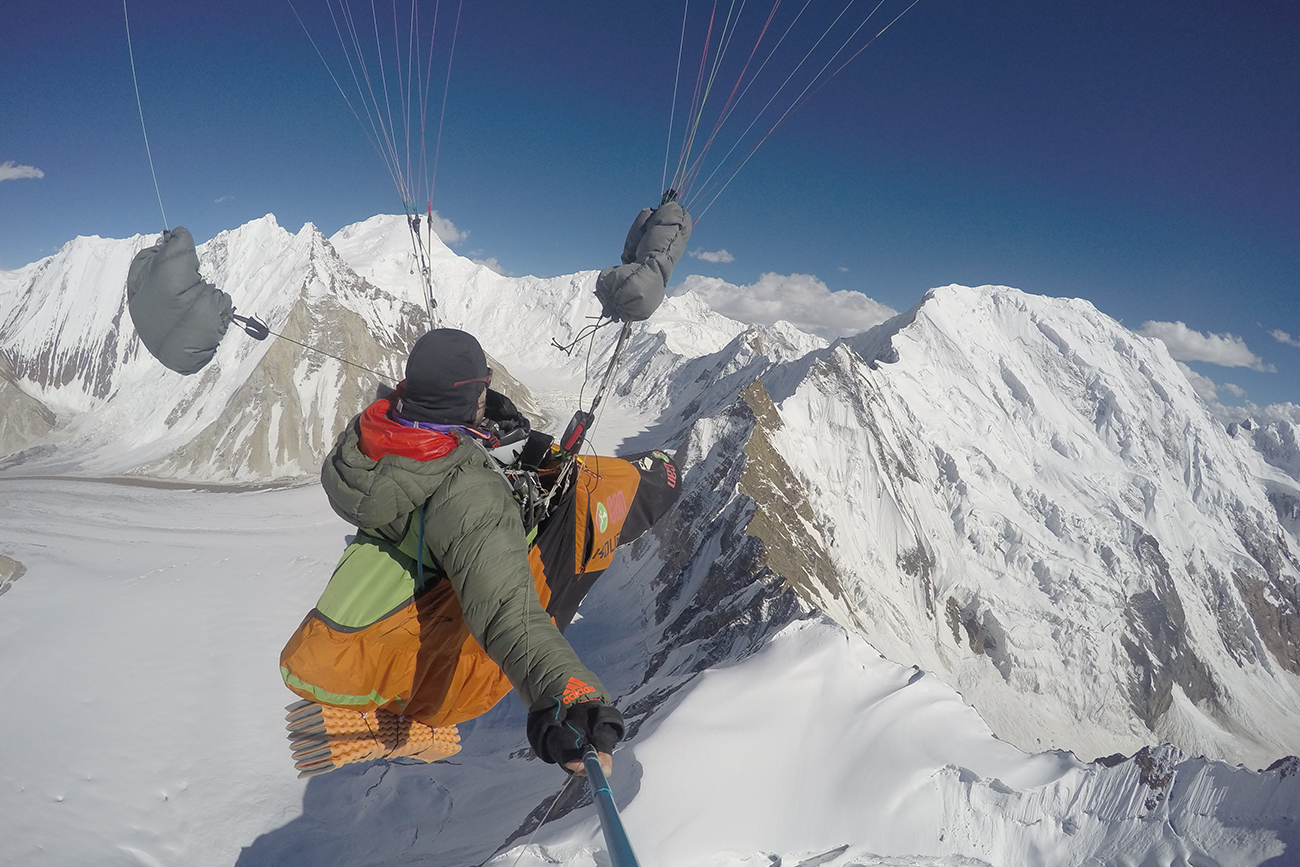 When dawn breaks on the morning of 23 July 2016, nothing suggests that it would be Antoine Girard’s big day. The weather is mediocre at best, but the sun fights its way through the clouds and Girard fights his way into the sky. If you look at the GPS track of his flight on that day, it just meanders through the air. He ‘leaps’ from summit to summit in order maintain altitude. After five hours of uninterrupted flight time and a distance of almost 200 kilometres, he finally begins to ascend Broad Peak. Although his oxygen is giving out, he flies on and keeps working those math problems. First, he flies to a secondary summit, then at 3:00 pm local time, he finally floats over Broad Peak (8051m).

At 8157 metres, a good 100 metres above the summit, a shout echoes through the icy air. ‘Up there, I had to concentrate so hard on surviving that I could only allow myself a brief cry of joy,’ Girard recalls.

What Girard learned during his record-breaking flight, he immediately incorporated into future plans. ‘Because my oxygen device didn’t work on Broad Peak, I now know that I can do it without it. I can save this weight on my next expedition.’ While this may be evidence that Girard is actually somewhat concerned with numbers (i.e., the weight of the luggage) in the end, it is about getting to know himself and, on his own, finding the confidence and courage within to reach new heights.