For most of us, rollerskiing would not be the most obvious choice of sport equipment for crossing the North American continent from north to south. For biathlete Raimonds Dombrovskis, it was the perfect thing to do in the summer of 1988, and it was the longest training run of his career. Although a 6759-kilometre journey is more a matter of endurance than speed, incredibly high speeds were inevitable on Raimonds’ long downhill runs. On the 1988 trip, after his wheels had been comfortably broken-in, he was able to reach speeds of up to 120 km/h! In 2014, his top speed was just 70 km/h— and even that felt dangerous! In winter, one of the keys to success in cross-country skiing is choosing the right wax; for training in summer, it’s the right wheels. The wheels Raimonds Dombrovskis used weren’t on the market for long, but they made it possible to complete the trip that consisted of mostly unpaved roads. Unlike in 1988, off-road rollerskis now have brakes. This would have made many some descents 30 years ago much more relaxed. Every day, Raimonds updated the number of kilometres he covered on the side door of his VW Bulli. He wasn’t out to set a speed record, and there were no coaches or sponsors who expected a certain level of performance from him. In fact, he and his team were self-sufficient and rather short of cash throughout the entire trip. They kept their heads above water by selling sponsored sunglasses and T-shirts. ‘My girlfriend said, “If you go, take the dog with you!” And it was okay. He was my buddy. I could talk to him. He always agreed with me.’

Raimonds estimates that his dog, Bucis, ran about 70 percent of the trip with him. At the end of the journey, when Raimonds returned to his studies at the university in Anchorage, he was unable to take Bucis with him. Fortunately, his girlfriend’s sister, already a devoted dog owner, took Bucis in. When people asked him why he was going on this journey, Raimonds would always say, ‘When I left, I had no reason. But now I have 100.’ In addition to discovering the captivating landscape of the American West, he became aware of new sides of himself. For the documentary, he repeated the journey again in 2014. ‘Why’ is an actual place, by the way; it’s located on Arizona State Highway 85, not far from the Mexican border. Today, it’s (almost) unimaginable, but there was a time when it was possible to find your way to your destination without GPS and Google Maps. Before the Internet and smartphones, route planning was, for the most part, still based on map reading. And thank God, there weren’t too many junctions on the North American highways. THE ROUTE: At first Raimonds thought he would need to cover 60 kilometres per day but discovered along the way that he had miscalculated. In order to complete the route within his given timeframe, he would have to do 80 kilometres per day—a distance you would never attempt in normal training. Whether on snow or on the road, the skating movement is the same. However, you have much more grip on paved roads than on winter snow, which is why Raimonds preferred to train on gravel. In his opinion, this was better preparation for the winter. But an adventure like this in snow on cross-country skis would never have occurred to him. For the first leg of the trip, Raimonds was accompanied by Florian Hüttner, whom he had met two years earlier at a biathlon competition. Along with Martins Grants, who drove the support vehicle and later became the cameraman, and Bucis, it was unfortunately rather tight in the VW T2. In 2014, a much bigger documentary crew was on board (but no dog!), which is why the vehicle also needed to be one size bigger. Raimonds Dombrovskis was born in 1962 in the Latvian Soviet Socialist Republic. Problems with the KGB prompted his family to move to the United States in 1979. He had already competed in biathlons at a professional level in his home country, and after only two years in America, he was also very successful as part of the U.S. team. He received a sports scholarship and became a seven-time U.S. champion. One highlight of Raimonds’ biathlon career could have been the 1988 Olympic Games in Calgary. However, an appendectomy put a spoke in his wheel shortly before. While he was fit enough to accompany his team to the games (and shake hands with Ronald Reagan), he did not actively take part in the competitions. His rollerski journey was, therefore, a reaction to this disappointment. Raimonds wanted to be perfectly prepared for the next season. ‘On one downhill, I passed a car. That’s how we knew it was over 60 miles per hour.’ 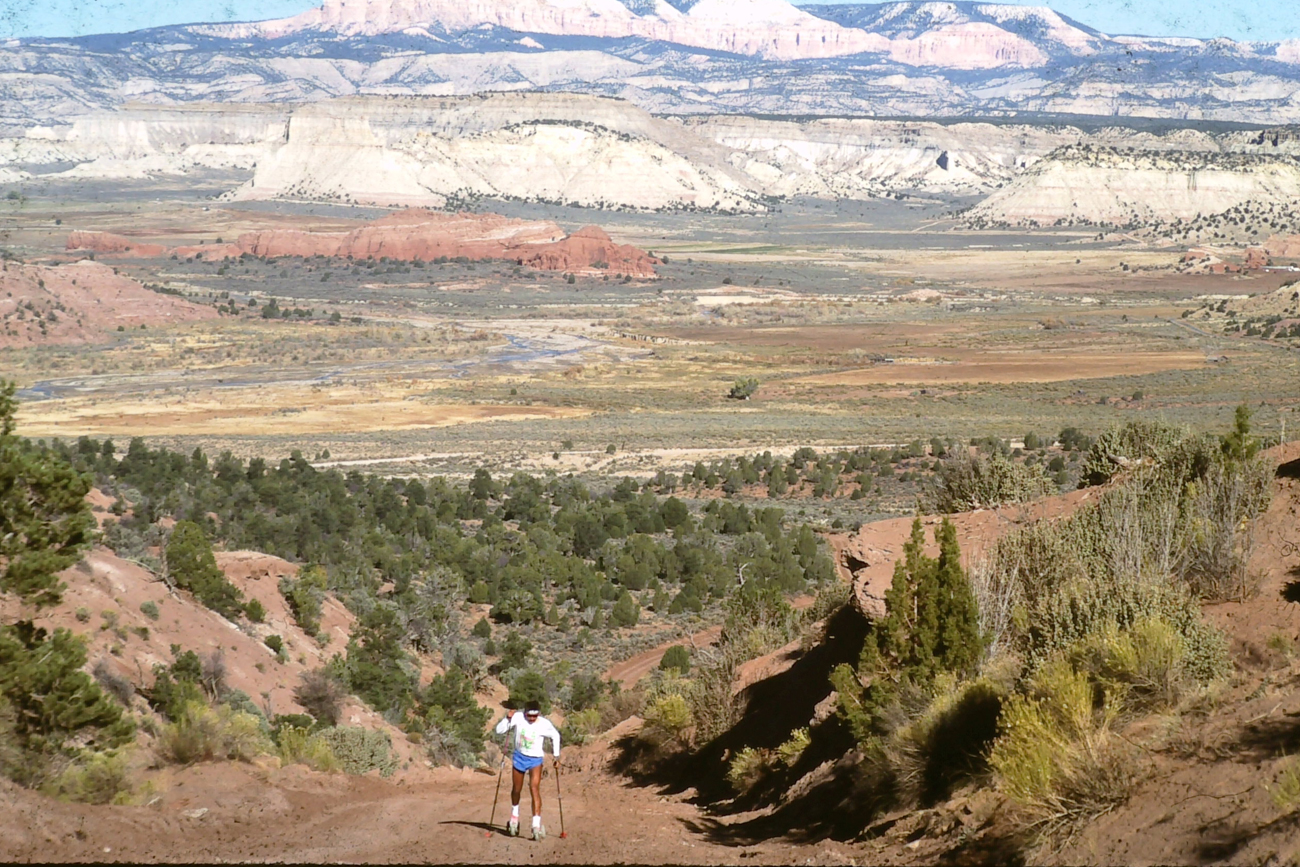 Although there was also the possibility of going directly along the coast to Mexico, Raimonds chose the more difficult route through the interior. The ups and downs of the mountain routes simply had greater training effect. He also liked the mountains more than the sea. Today, however, he prefers to spend his adventure holidays on rivers, e.g., on a boat trip on the Yukon River. When his girlfriend’s father bought a video camera in 1988 and suggested that Raimonds document his crazy adventure, nobody knew that the material would be on the shelf for almost 30 years before it would actually be made into a film. After two directors had already dropped the project, Arnis Aspers (lower picture, middle), who had known Raimonds since childhood, finally took the matter into his own hands and put his friend’s story on the big screen. 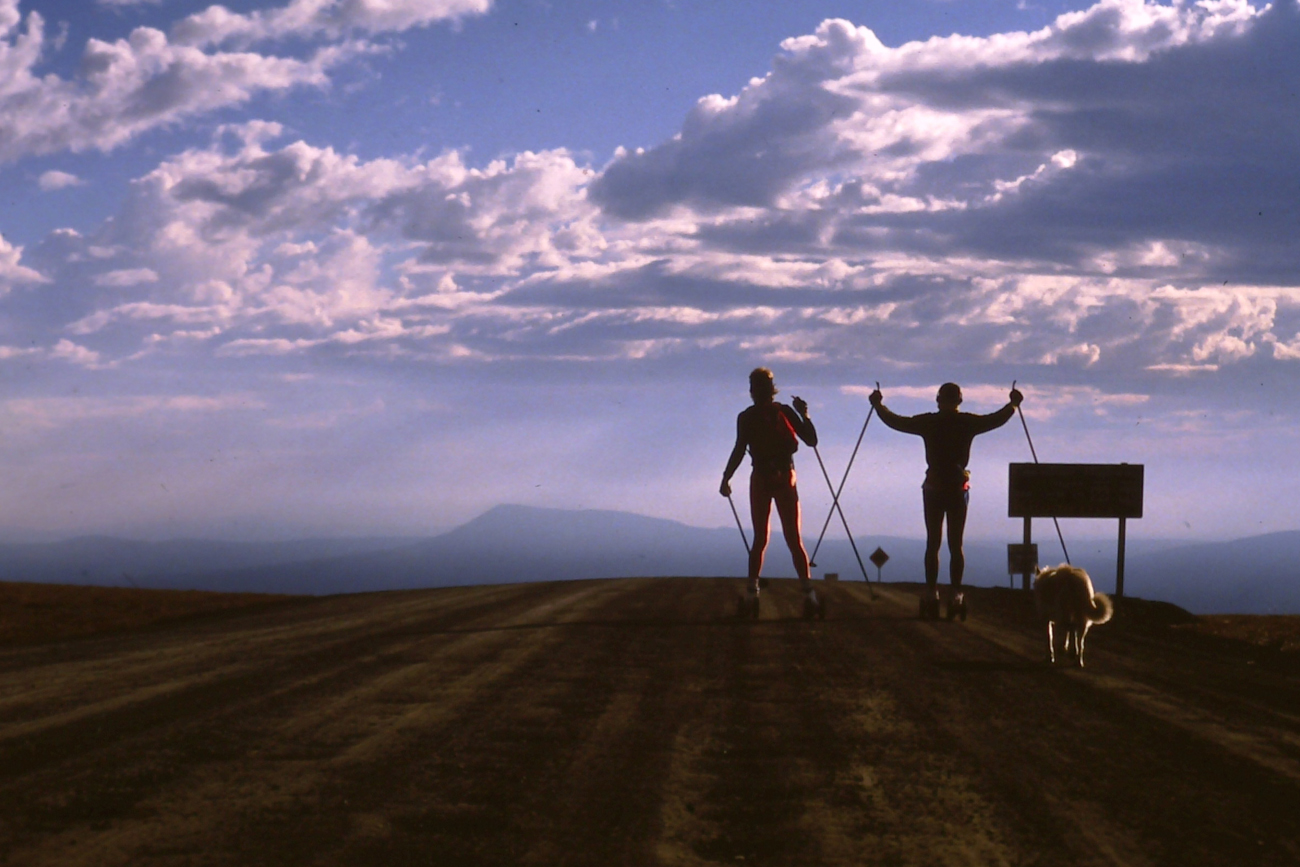 Even after his biathlon career ended, Raimonds remained committed to winter sports. He has been running a ski resort in Latvia since 2002. He also organizes the logistics for the Latvian bobsleigh team and managed the U.S. team at the Olympic Games in Sochi.