On Axel Heiberg Island, a long-held dream comes true for four mountain bikers. But even in this uninhabited desert, they witness the impact of civilization. 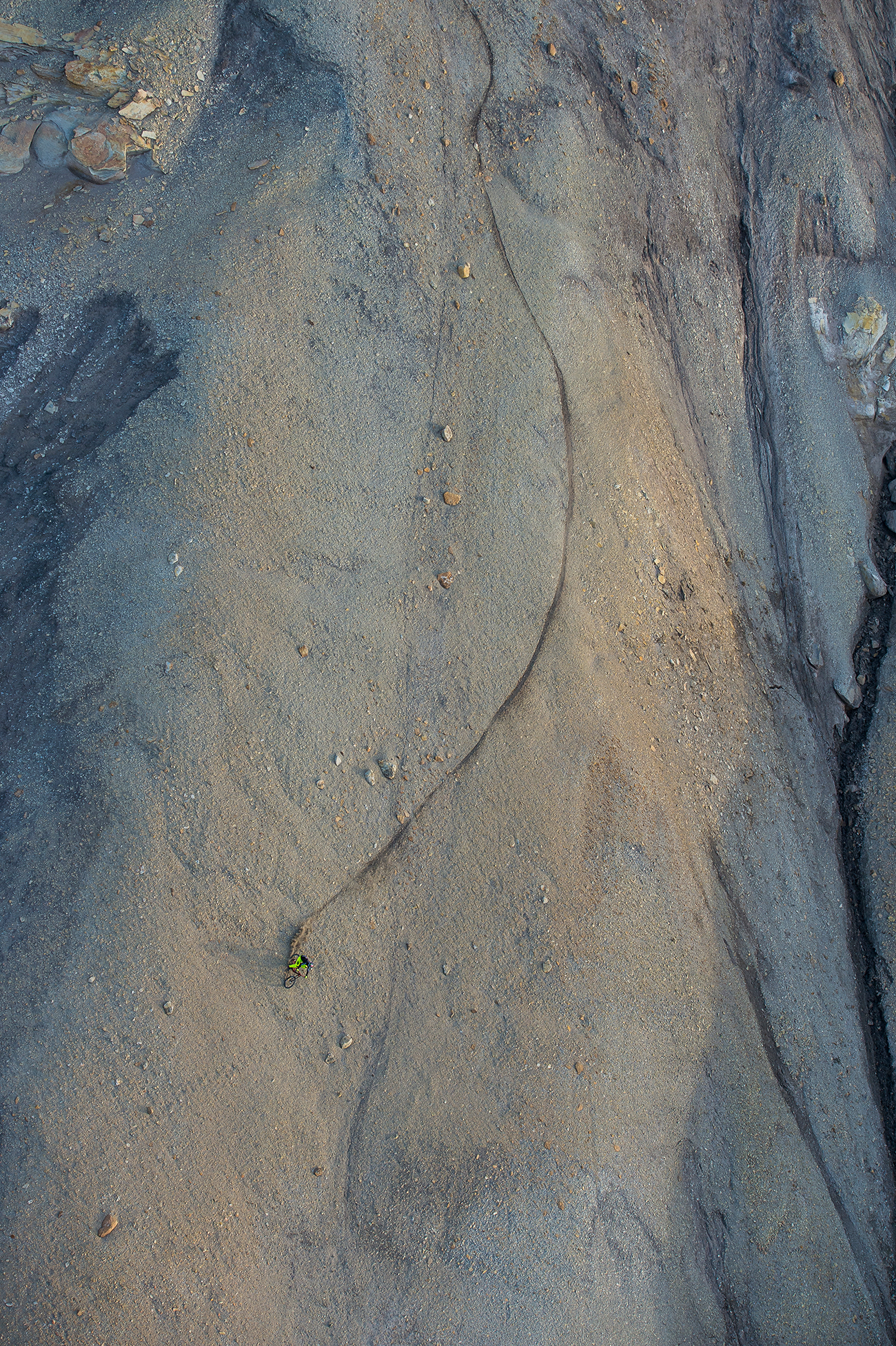 Before shooting began, the team had to figure out whether the area, which looked so perfect in photos, was actually suitable for MTB. A scouting trip to the far north revealed that there were lots of possibilities for riding lines, but not so much for building camp. It was a year before Cam Zink (image above) Darren Berrecloth, Carson Storch, and Tom van Steenbergen could begin their Arctic adventure.

Tom van Steenbergen, Carson Storch, Cam Zink (from left to right), and Darren Berrecloth (below) spent a month north of the Arctic Circle. All four rode a bit more carefully than usual—the nearest hospital was about twelve flight hours away. Darren Berrecloth carries his bike up the mountain—the ascent must come before the descent. And, while the ascents typically take a bit longer on Axel Heiberg Island, so do the descents! When Darren wanted to post one of his rides on Instagram, he found it wasn’t possible. The descent took longer than one minute, exceeding the maximum allowable length of an Instagram video. 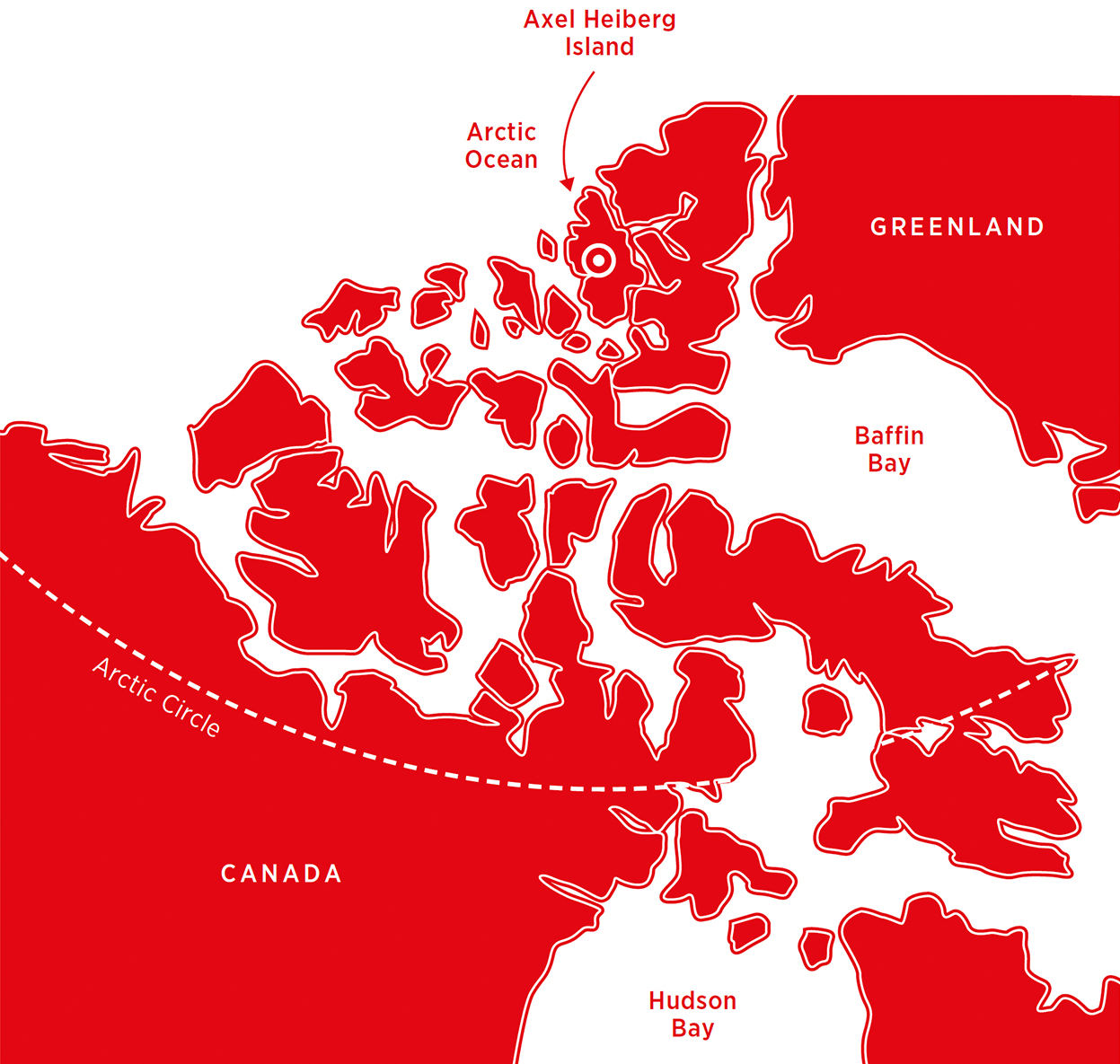 AXEL HEIBERG ISLAND is, at 43,178 km², only slightly larger than Switzerland. About 11,700 km² of the island is covered by glaciers, and the area has been explored since the 1950s. Axel Heiberg Island is uninhabited except for scientists from McGill who conduct research there seasonally. 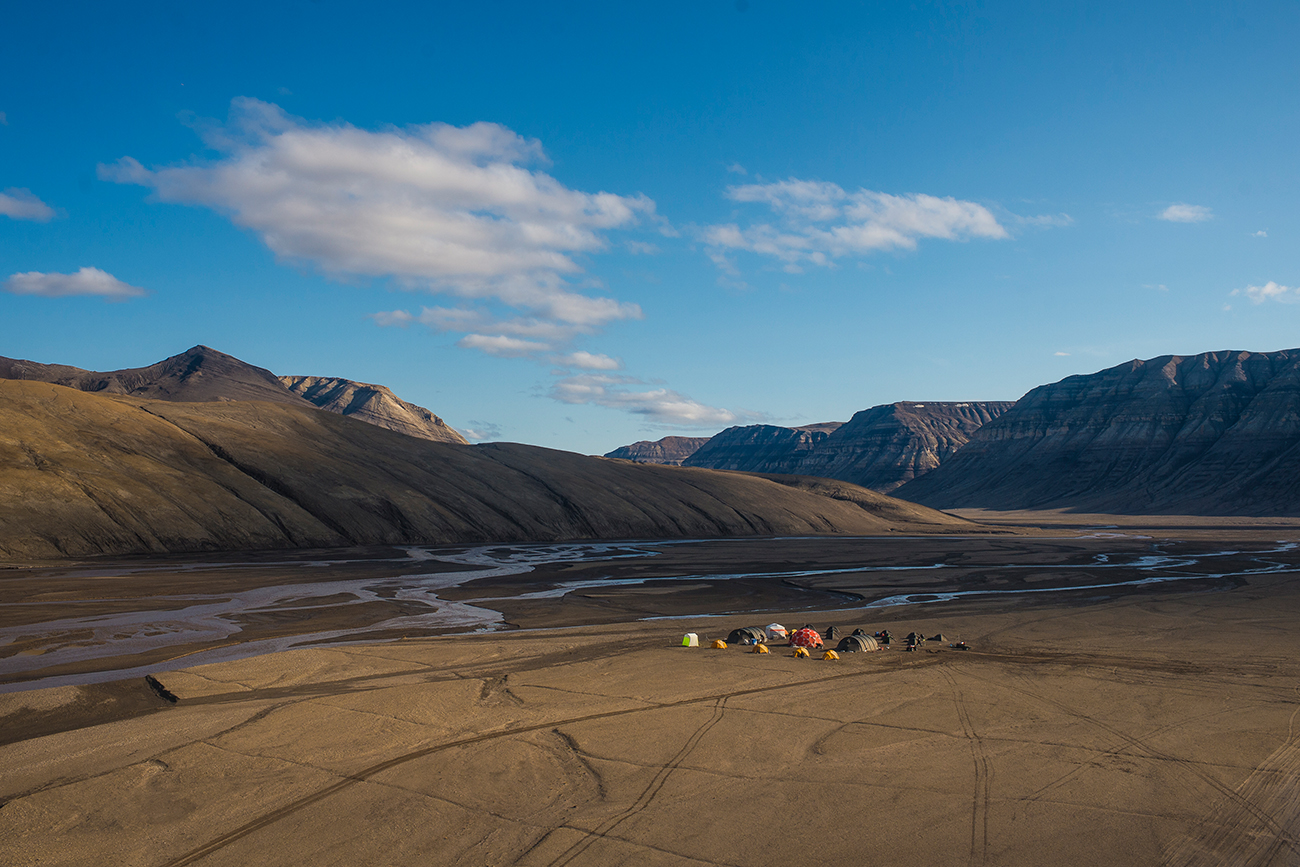 24 hours of daylight seems ideal for both mountain bikers and filmmakers. Theoretically, you can cycle and film around the clock. However, the reality is that everyone involved got very little sleep. And nights weren’t particularly relaxing. Director Jeremy Grant explains, “If anyone started snoring, the night was over for everyone.” 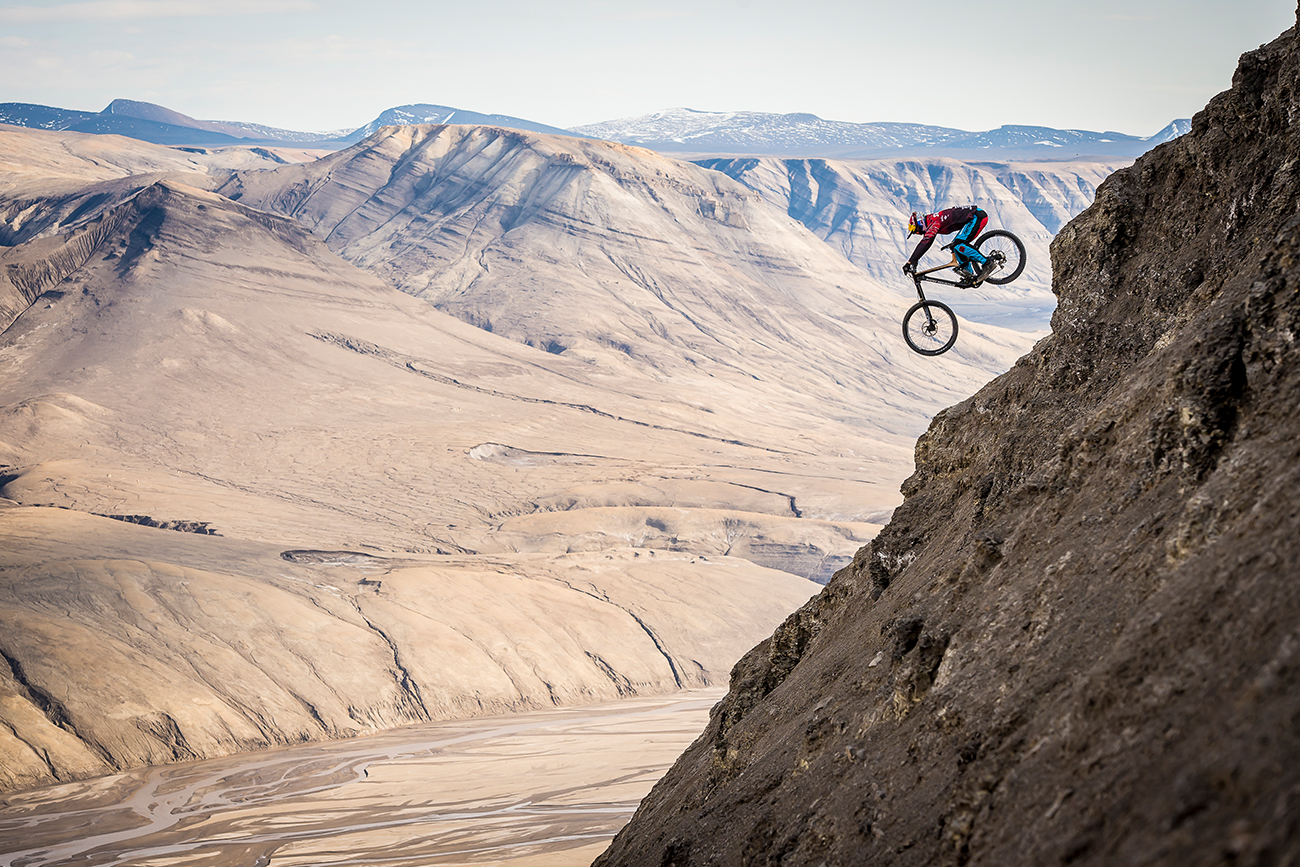 Every single run on Alex Heiberg Island must be carefully planned out. The barren landscape offers impressive views, but the long distances made it impossible to try too many variations while filming. But sometimes you get the perfect shot, like this one with Carson Storch. The effects of climate change are having even more impact in the Arctic than in the rest of the world. Although Crusoe Glacier is still consistently advancing on Axel Heiberg Island, most glaciers worldwide are in retreat. If this trend continues, more and more ice sheets that reflect sunlight will disappear and global warming will progress even faster. 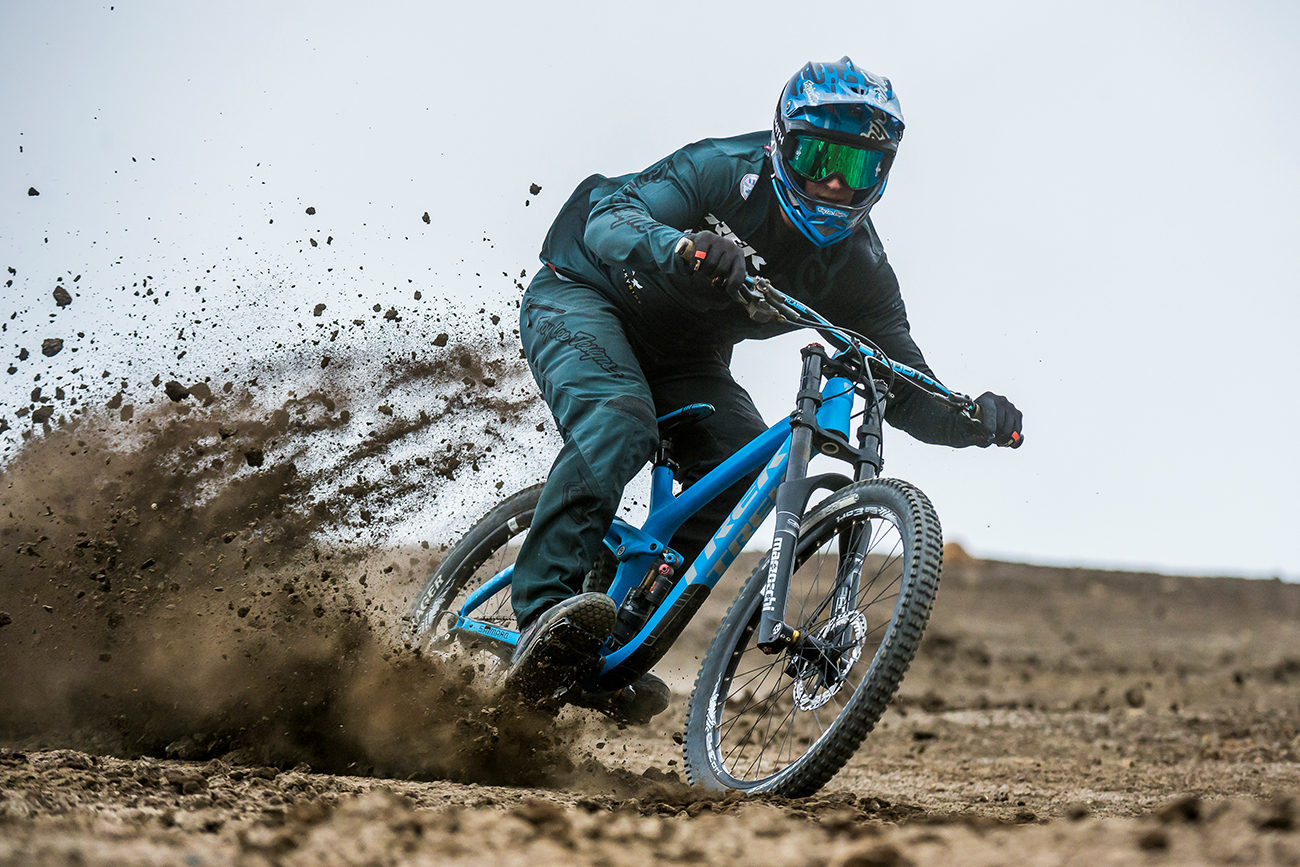 Premium dirt, as far as the eye can see, and not a trace of vegetation. Tom van Steenbergen had a clean shot; he just needed to keep an eye out for the possibility of a passing musk ox, caribou, or polar bear, some of the few permanent inhabitants of this Arctic desert, whose scree hills are only free of ice and snow for about two months in summer.